Hello the first full week of 2014. It has been packed with lots anime as I got started with the 2013/14 winter season. Nobunaga the Fool was cool and Nobunagun was LOTS of fun but my highlight so far has to be Hoozuki no Reitetsu! If you like grown-up comedy you should watch it!

I started the week off with my favourite game of 2013, and followed it up with posts with reviews for two films I saw last year, the dull 47 Ronin and fantastic and fun Rurouni Kenshin. The Gifs I made for those reviews have proven to be quite popular on my Tumblr blog! Yesterday’s trailer post was all about the small films and anime and this post is packed full of blockbusters. Here they are:

This is the first idol film of the year and it stars the girls of BiS and Electric★Kiss who battle each other in various contests.

Apparently this is based on an original idea which poles fun at international TV advertising. There’s a large cast of excellent actors like Satoshi Tsumabuki (For Love’s Sake), Denden (Cold Fish), Lily Franky (Like Father, Like Son) and YosiYosi Arakawa (Fine, Totally Fine).

Kiichiro Ota (Tsumabuki) has just scored a job at an advertising agency and already he is sent to the world’s biggest TV advertising festival with Hikari Ota (Kitagawa). They get to pretend to be husband and wife due to their similar family names but tey couldn’t be more different since she is serious and he is a bit of a geek (his Urusei Yatsura T-shirt is a giveaway) who loves to party. Kiichiro’s party soon ends when he finds out that unless his company’s commercial wins a prize he’ll be fired and soon he finds himself scheming and bargaining to get the prize.

Kiyoshi Kurosawa ended 2013 on a high as his latest film Seventh Code won two awards at the Rome Film Festival. The for Best director and technical contribution and was very surprised to get them. This is a 60 minute thriller starring Atsuko Maeda, a former member of AKB48 and rising actress who has worked on titles like The Drudgery Train and Tamako in Moratorium. The film looks really, really intriguing and I can watch Atsuko in anything.

Akiko (Maeda) travels to Vladivostok to track down Matsunaga (Suzuki), the man she is convinced, who is the love of her life. When they meet Matsunaga claims not to remember her and tells her not to trust anyone in a foreign country. He then leaves. When Akiko tries to find Matsunaga again she is attacked by the mafia and thrown into a wasteland with no money.

A musical comedy with a cross-dressing dude. I wouldn’t be caught dead watching this… and yet… OH! MY! GOD! It could be fun! No. Just re-watched the trailer. No. The main character is played by Hiromi Sakimoto (Zero Focus)

Seiki Fujimoto (Sakimoto) was a rather lethargic teacher until a woman committing suicide by throwing herself off a building used him as a landing pad. Now he’s in a purgatory like place between Heaven and Hell and given a task by a person named Gongensama – make four women personify feminine beauty (“Yamato Nadeshiko”) and he can get into heaven. And so it’s back to reality with Fujimoto who meets some strange characters…

Apparently the final chapter (and fourth movie) of the popular mystery comedy series where the magician Naoko (Nakama) and the physicist Jiro (Abe) embark on an adventure and encounter strange things. In this adventure Shinichi Kagami (Higashiyama) has got the mining rights in an unexploed location where the local people believe in magic and are casuing trouble. They head into a jungle where they meet a tribal shaman (Mizuhara).

This is the live-action film adaptation of the delinquent gang manga Shippu Nijimarugumi which was created by Shinya Kuwahara and is still being released. This accompanies a TV adaptation and it stars Manpei Tagaki as chief yankee dude Yun Nijikawa who wants to get “Infinity Gold,” a treasure awarded to the number one gang in the area. Here’s the music video for the theme song:

Yankee action as thuggish young men punch each other, scowl and growl and makes school girl’s hearts flutter with their roguishness

I’d usually make some crass and borderline offensive comment about sexy women that paints me as a lecherous swine but I was sent on a “Diversity Course” this week and so I’ll be good. That and the trailer for this looked like junk and I’m not as lecherous as I make out. 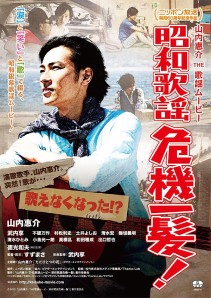 Keisuke Yamauchi is an Enka singer who makes his silver screen debut with this film which is a story that sees him endure the troubles of show-business and a rare disease that prevents him from singing. Will he overcome his troubles?