Doctor Who (Matt Smith): “Sorry about the Dalek”

Clara: “Also the showing off”

Spoilers (slight ones, at least)

I used to write about Doctor Who (and even the Sarah Jane Adventures) here when I first started this blog but stopped because there was little that grabbed my attention (okay there was the Van Gogh episode and last season’s one about the haunted manor) and I wanted to focus on films and anime. All that changed with last night’s episode celebrating the 50th anniversary of Doctor Who. It is worth writing about because this episode was really well done.

This episode was meant to be big. The last episode of the last season ended on this stunning revelation: 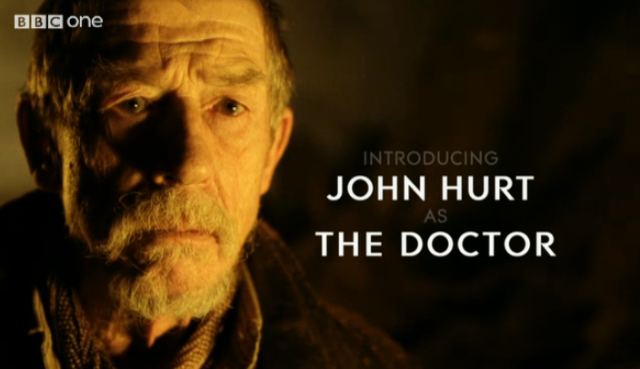 News and trailers and one-off mini episodeswere steadily released by the BBC. David Tennant and Billie Piper were coming back. Ace actor JOHN HURT was going to play The War Doctor in the heart of the Time War. It was going to play in a cinema as a 3D feature.

This felt like a game-changer that would go to the heart of Doctor Who mythology and reset things. In a way it did bring all of these things together successfully and change the timeline of the show and set up the Christmas episode and the introduction of the 13th Doctor.

The show was good, like one of the better episodes with enough darkness and action and a twisting timey-wimey plot.

It opened with an action-packed sequence full of spaceships and explosions as Daleks blew stuff up (all donewith decent CGI) and we see John Hurt in action before the show slinked back into the standard whimsical adventures featuring Matt Smith and Clara being called up by U.N.I.T. to halt an invasion of Earth from the past where David Tennant was cavorting with a sexy Elizabeth the First. Somehow the war in Gallifrey and the invasion of earth were all pulled together in a complex story that was fun and breezy but with plenty of depth.

It worked and was never confusing. Doctor Who is at its most interesting when the storylines include actual time travel. He is a time traveller so seeing the Doctor and his assistants think their way out of danger or entrapment or an awkward plot twist through clever manipulations of time and space is always intellectually engaging because some of the solutions can be inspired whether they utilise the Tardis or not.

It was fun seeing the Doctors gallivanting in present day London, London of the Elizabethan era, and Gallifrey in a complicated story made dark by allowing the viewers to see the Doctor’s crucial actions during the Time War. It packed full of emotional resonance that fans will salivate over. Furthermore the transitions between lightness and darkness were handled well thanks to the great acting off the Doctors.

The three actors at the heart of this episode worked well together. We had the gravitas of John Hurt playing off against the banter between the two younger (older in the storyline) Doctors. His world-weary and battle scarred Doctor playing the curmudgeonly adult to two silly boys who dread growing up and run away from the dark past he represents. The dramatic climax which the series kept alluding to was emotionally rewarding as the Doctor finally faced his demons. 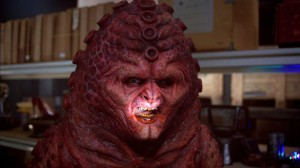 As someone who grew up watching Doctor Who (mine was Sylvester McCoy) and the re-runs of older episodes featuring Tom Baker and Jon Pertwee I’m familiar with how inspired the aliens can be and how dark it can get and that’s the Doctor Who I love. The evil monsters like the Autons, Weeping Angel, Clockwork Droids and the original Silurians (not the new ones) and it was great to see the Zygons make a comeback, gooey shape-shifters from the school of Invasion of the Body Snatchers. These chaps are truly creepy to look at and their abilities made the plot that little bit trickier much like the Japanese film Ku_On. Nothing mind-boggling but it altered the structure of the story enough to make it even more interesting.

My one complaint is that I would have liked to have seen more of the old Doctors and the negotiations between humanity and the Zygons and their impact on The War Doctor rather than seeing them get dropped. That’s a minor gripe. I don’t expect or want the show to take itself too seriously and people who pick holes in the plot need to relax – this is aimed as much at kids as it is adults these days.

So overall I found it rather good.

I think I have mentioned on this blog and others when I’ve encountered Doctor Who filming around by my house/place of work. Parts of the 50th episode were filmed where I work… Here’s some pictures of my workplace…

It doubled as the National Gallery down in London but the paintings – Joshua Reynolds! Gainsborough! Hogarth! – that chaise lounge (owned by Lord Clive of India) are objects I walk by nearly every day. See that corridor at the back – leads to the Impressionist collection. I was in work at the time it was filmed and I saw the extras and the crew but I didn’t meet Matt Smith or get to be a guest star – ;_; I guess I’m not awesome enough yet – or weird looking enough to be an alien (yay?). Still, I have my memories of almost meeting him when he first took the role!

My first Doctor was Sylvester McCoy and my first assistant was Ace who was played Sophie Aldred. Now that I look at the dates he was in the role I wonder if they were re-runs because I was very young when he took over…

Oh, and I saw a Tardis on a castle on my way to work today 😉