This week was all about trying to get my anime first impressions underway… even though I have a dozen or more film reviews to do. I’ve pretty much started hacking away at the numbers and I’ll spend the rest of the year posting them so no more seasons like a Hideo Nakata one that I had promised. My first First Impression was for Samurai Flamenco. It was the last show I checked from my Autumn Anime 2013 List and it became my favourite. I posted news of a Ringu screening and talk and I followed that up with week two of the Republic of Thieves Read-along. In terms of Japanese stuff watched, I’m on top of all my anime and I’ve started the drama Galileo which is amusing.

This week’s movie trailer post is split into two because something like 20+ Japanese films were released. I needed the macho hetero fabulous music of Jojo’s Bizarre Adventure to power me through writing this stuff. There’s just too many for one post so the next part is tomorrow. I hope I don’t bore you. 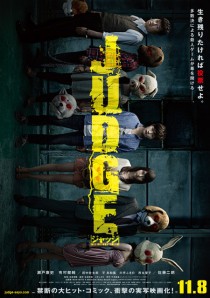 The seven deadly sins are lust, pride, gluttony, greed, sloth, envy, and wrath. Seven people who committed them are locked in a room by someone and must play a death game while wearing animal masks.

According to the Japan Times film review Koki Mitani’s films are supposed to be very funny (Hello Mr McDonald and Magic Hour do look funny) but underappreciated in the west, and his latest title based on his novel is supposed to be good but may fail to catch foreign interest due to its extensive reliance on historical figures. It certainly is star-packed (Koji Yakusho!, Miki Nakatani!, Tadanobu Asano!, Denden!) so that shouldn’t be a barrier if the characters are fun.

Oda Nobunaga is dead! Betrayed by the troops of Akechi Mitsuhide, the head of the Oda clan commits seppuku! Now another battle rages at the Kiyosu Conference where various factions meet to discuss which of Nobunaga’s sons should become the new leader! The fiery Shibata Katsuie (Yakusho) is in favour of Oda’s third son Nobutaka while wily Hashiba Hideyoshi (Oizumi) backs Oda’s second son (Tsumabuki). Personalities as family, generals and various clan functionaries negotiate and the audience are sure to laugh!