Back from another festival (BFI London Film Festival) I am now facing the prospect of getting back to work and it is with some relief I go back to work because there is safety in a familiar routine! That written, I had fun. The films I saw were awesome! I started a Raindance season of reviews but I’m going to scrap that because there are some LFF reviews to get out. Some Raindance stuff did slip out – a review for Shindo – The Beat Knocks Her World, a post explaining the line-up of reviews for the films at the festival and a look at the live-action Japanese films at the Leeds International Film Festival. Yes, I’m going to have a series based on reviews at the LFF 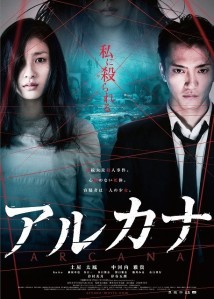 Mitsuki Tanimura (Thirteen Assassins), Tao Tsuchiya (Tokyo Sonata) Goro Kishitani (One Missed Call) star in an adaptation of Yua Kotegawa’s manga of the same name. It is directed by Yoshitaka Yamaguchi and he has been an AD on Miike films.

Detective Murakami (Nakagauchi) meets a girl who has the ability to speak to the dead but suffers from memory loss and can’t remember her own name so he calls her Maki and the two work together to solve a murder case involving a mad bomber. Somehow, Maki’s true identity is linked to the case.

This star-studded financial thriller was seven years in the making and has its roots in a mythical but interesting historical legend about the M-Fund which was supposedly money that Japan had looted from neighbouring Asian countries and disappeared after the war but some claim it was used by US and Japanese authorities to fund the reconstruction and post-war boom. It is directed by Junji Sakamoto (A Chorus of Angels) and stars Koichi Sato (Infection, Starfish Hotel), Mirai Moriyama (The Drudgery Train), Joe Odagiri (The Great Passage, Mushishi, Bright Future), Susumu Terajima and Ittoku Kishibe.

1945, Japan has lost the war and an army officer is dumping 600 tons of money looted from neighbouring Asian countries into Tokyo Bay. This gold will be called the M-Fund.

2014, con-man Yuichi Mafune (Sato) is recruited by Yuki Seki (Moriyama) who is working for a mysterious man named Honjo (Kishibe). He runs an organisation that knows where the M-Fund actually is and offers Mafune the chance to earn major money from stealing it. All he has to do is evade a mysterious gang led by a dangerous woman named Miyuki Takato (Mizuki) and travel from Japan to Siberia and the US.

Does Your Soul Have a Cold?

The Japanese title looks something like Mike Mills’s Talk about Gloominess or Mike Mills’s Story of Depression. Mike Mills directed the film Thumbsucker but this is totally different as it’s a documentary about Japanese people suffering depression filmed since the mid-2000’s. Souls Having a Cold? Is the way Japanese refer to depression and it is rarely talked about openly but in this documentary Mike Mills records a group of people dealing with depression and how they deal with it, whether by pharmaceutical means or other. Apparently most of the cases end on a positive note.

This is the 35th anniversary edition of a popular documentary about a fox family surviving in the far north of Japan.

This is another yankee action title in the long-running series (I’ve lost count) where young thugs stare menacingly, shout and growl and get into fights. Apparently some of these young impress the yakuza enough to warrant an offer of signing up to a gang. No trailer but plenty of clips from other Gachiban films on Youtube.

BLOOD OF THE WOLF! That was the fictional low-budget samurai action trailer in the God-tier film Why Don’t You Play in Hell? This is a far more serious and better funded real-life samurai drama set after a time of famine when the shogunate is cracking down on potential unrest though sending loyal warriors to different clans to check on their loyalty.