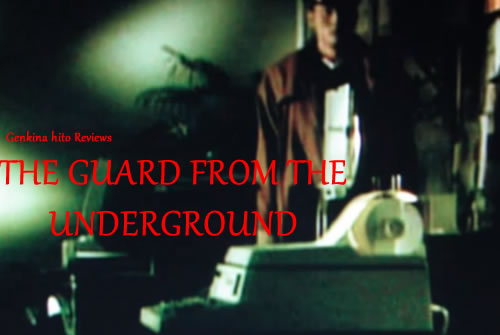 The Guard From Underground 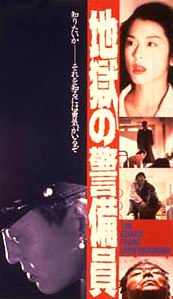 Akebono Corporation is a major business and Akiko Narushima (Kuno) is on her way to a new job. She used to be a curator at a gallery and is now the new adviser for the purchases of paintings for the corporation. Akebono are also hiring a new security guard in the rather tall and solidly built shape of former sumo wrestler Fujimaru (Matsushige), a man who is wanted by the police investigating the case of the murder of his lover and her lover, another sumo wrestler…  He was released due to being insane but the police are looking to prosecute again. Akiko starts her first day brightly and meets her new colleagues, the flighty Hanae Takeda, the rather useless Ken Nomura, and anonymous bald dude Minoru Yoshioka (Suwa). Her workmates are great… apart from her lecherous manager Kurume (Osugi), a carefree head of human resources named Hyodo (Hasegawa) and the mighty Fujimaru who takes a liking to her. 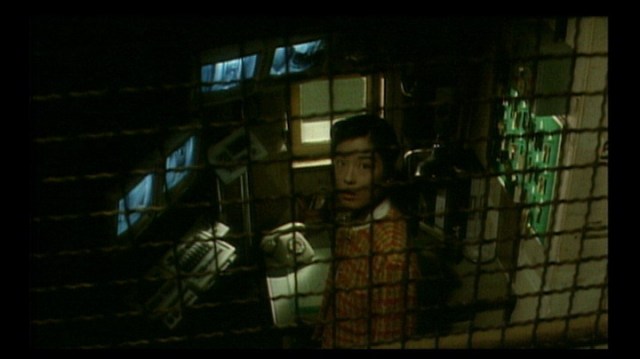 I’m sure that reading the plot synopsis you noted the absurdity of Fujimaru’s employment. A mentally insane criminal as security guard? Who the hell conducted the interview? Or maybe Kurosawa just wants to set up an almighty clash between Akiko and Fujimaru! Anyway The Guard from Underground cares little for irrelevant things like logic or characterisation, forget that. This is a slasher film so we’re going for terror!

Kurosawa is good at creating scary worlds. His cities are desolate, haunted places (Pulse) filled with ghosts and people who carry rage (Cure) and regret (Séance). A trip to the river (Retribution) reveals haunted memories and more ghosts and even when he goes on holiday outside of the city he takes us to haunted swamps and introduces even more yurei. With this film we see a haunted workplace.

Despite the low-budget, Kurosawa is able to work his usual magic in making a scary set. The office building is like something from Silent Hill. There is low-lighting used and the overall colour scheme is a sickly green hue plunging into the darkest shade of black. Everything looks damp and dingy. Rotten. Corridors are lined with horrendous looking metal doors, grimy tiles line pokey little kitchens which have opaque plastic sheeting as a door and shadows are everywhere for the killer to lurk in and attack victims! There’s even a basement where a foxy female electrician works but that has wires and trash strewn everywhere so it’s still scary and I wouldn’t visit despite her foxiness…

It is atmospheric stuff but the overuse of shadows occasionally makes it hard to see what sort of horrific things happen to the dull characters.

Dull characters? Dull as in stupid. This is a slasher film so intelligence is not a major factor

in building these characters which partly explains why Fujimaru was hired and the cast get picked off so easily. They are clichés found in any typical office. An OL (office lady), a well-meaning but useless guy and an over-bearing manager who spends his time fantasising about the sexy new hire and an impetuous bold human HF boss who cares not a jot for conventional office-politics or his office underlings (even when they are being bumped off) which, again, partly explains why Fujimaru was hired. They do not hold a lot in terms of characterisation  but they are fun to watch. Osugi as a sexual predator desperately perving over Akiko has many humorous moments but the film’s focus is on Akiko and Fujimaru as they take centre stage.

Final girl Akiko, is a bright, intelligent female and the only one sensible enough to see the threat posed by an implacable nihilistic sumo psycho. Akiko is by far the most sensible and good-natured heroine in a horror film ever. While she does get cornered in some silly situations, she is brave and she outlasts her colleagues, those lecherous men in the workplace.

Now Fujimaru is a crazy serial-killer sumo security guard murdering office workers. Sounds fun but he is not the most inventive of killers. His defining attribute is that he is physically huge (tall, he is shot from low angles etc.). He may be a sumo wrestler but he does not use sumo moves, which is a bit of a disappointment because the best parts of a slasher film are the kills and this could have been a funny and unique element. So this almost lacks teeth but Yutaka Matsushige looks intimidating, a tower of merciless muscle who stalks the corridors of Akebono. As Fujimaru, he favours using blunt objects or his hands to kill people with nasty bone smashing blows. His actions are pretty violent by Kurosawa’s horror film standards. A lot of it is left to sound effects and performances, painful and horrified reaction shots, because most of the kills are obscured by the shadow drenched sets but the blood still flows which is something I have not seen from other films by Kurosawa and when Fujimaru goes on the rampage, it becomes fun and we dread and delight in hearing the sound of Fujimaru’s walk.

So while Fujimaru will not be joining the pantheon of horror bad-guys due to the lack of sumo action, he at least provides a decent villain and even gets a bit of existential philosophising at the end. We know the killer, we know the heroine, all that matters is seeing her negotiate the shadowy path to survival, dodging the corpses left littered by Fujimaru along the way.

Overall, while there are plenty of enjoyable bits the whole thing is let down by a killer who doesn’t quite reach the heights of absurd fun suggested by psycho sumo security guard. The atmosphere is great but the kills, when they can be seen, are unimaginative. This is more of a film for Kurosawa fans who want to see him pay tribute to a genre he likes and his nascent horror abilities.