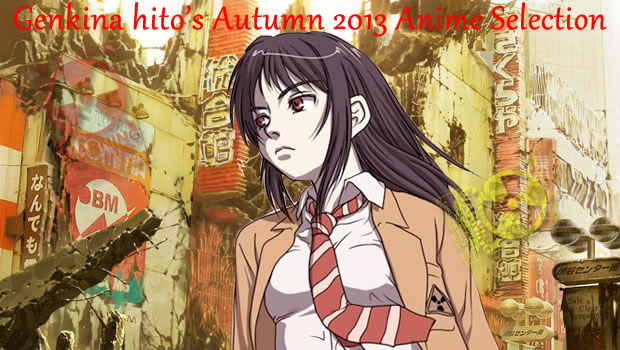 If I had to describe anime in one word it would be diverse. The large numbers of titles released every season contain a highly varied number of concepts. Some of them may be sequels or plumb familiar themes and settings but there is usually something to set them apart and make them unique. It’s all down to the efficient production model the Japanese entertainment industry uses where any manga/light novels gets treated to a multi-format adaptation. In recent years we have slowly edged out of a trough of moe into some more sophisticated titles that can be described as post-modern or meta-narratives with interesting characters. Compared to anime alone (not including films or dorama), western television is absolutely unimaginative. Diversity best sums up what’s on offer with the Autumn 2013 Season.

while listening to the soundtrack to Hana and Alice non-stop. It took a while (hours) what with checking the autumn 2013 anime season guide (on the right) and looking up things on Anime News Network/MAL and news reports I do for AUKN. The spring and summer seasons had a large number of titles but the autumn one blows them all away with over forty. There are some sequels and a lot of manga/LN adaptations but after a disappointing summer season (the only stand-out anime was the incredible Watamote) I felt energised by the variety and imagination on offer with the autumn season which starts September/October. Here are my selections:

Essentials (I’ll see it through to the bitter end!):

It is the year 2036 and a nuclear accident has caused Tokyo to suffer radioactive contamination which has resulted in the city being put under a blockade. Three high school girls have been sent to the city. These girls aren’t normal, though since they have been selected for this deadly mission because they are the results of genetic engineering which has made them impervious to radioactivity. They are a special forces unit codenamed “Coppelion,” in the 3rd Division of Japan’s Ground Self-Defence Force and they know how to use guns! 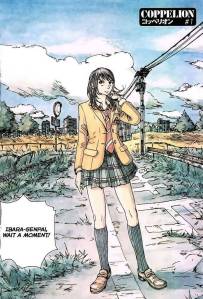 This was the first title to get my attention thanks to the detailed key visuals and a quick read of the manga which is by Tomonori Inoue which is full of girls and guns and…, yes, pantsu. It was originally going to be adapted a few years ago but was put on hold after the Tohoku Earthquake and Tusnami which hit Japan on March 11th, 2011 and all of the subsequent problems with Fukushima Daichi nuclear power plant. The nuclear problems haven’t gone away as news reports and films reveal (Land of Hope review last week) but inappropriate or not, I think this manga is definitely due an adaptation because it’s pretty action-packed and a lot of fun.

The trailer is full of great animation and music. Three girls taking out giant robots and stealth bombers with rocket launchers? I totally want to see this now!

There are no details of the staff list at the time of writing but it will be updated when that info comes to light. The Japanese vocal cast has been announced with industry vets Maaya Sakamoto (beautiful but tough Funamushi in Fuse: A Gun Girl’s Detective Story), Haruka Tomatsu (the big existentialist speech giver Older Sister Maid in Maouyu), Yui Horie (the sexy and deadly Masako Natsume in Mawaru Penguindrum) and Kana Hanazawa (the so cute I’d die for her Mayuri Shiina in Steins;Gate) filling the lead roles.

Utsutsu and his little sister Yume Hasegawa are close so when Yume sees a mysterious red butterfly and her body undergoes a strange metamorphosis into a creature that eats humans, Utsutsu struggles to find a way to restore his sister.

manga and it was the second title that caught my eye. The manga is very misleading at first because it’s art style is rather light and the cute sister and school stuff was rather rote but I didn’t expect it to become quite as bitter and bloody as it did. But it went there… and I was hooked and now I want to watch this. Perhaps it’s my roots in violent 80/90s body-horror anime or my interest in seeing how far the anime will take this… Anyway, the concept has great drama in it what with the mix of horror/love and othering that goes on. Another thing that suggests the story will be brought to the screen with skill is that the director is Tomomi Michizuki and he was the chap behind House of Five Leaves and Kimagure Orange Road so he knows how to craft stories around compelling characters which is what I expect this brother/sister title to be. The only voice actress announced has been Ibuki Kido (Kasumi Shinomiya in GJ Club) who voices the sister Yume Hasegawa. 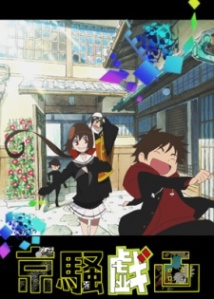 The original story took place in an alternate version of Kyoto where humans and spirits co-exist. A young girl named Koto from our world found herself wandering into that world where she met a mysterious monk, was chased by tech-obsessed girls and uncovered a mysterious plot.

I loved the original 2011 one-shot Kyousogiga ONA. The visuals were fun, the story crashed along merrily and it was generally a brash and bizarre anime that contained so much life it had to get a TV anime. It was like Toei was just having fun and throwing out their bizarre ideas and creativity onto the screen and it worked because every episode was like a riot of visuals and audio and it all made sense in a mixed-up hyperactive way. The original staff and cast return so it will be directed by Rie Matsumoto and feature character designs from Yuki Hayashi.

Koto is voiced by Rie Kugimiya (Happy in Fairy Tale) and she has support from Aya Hisakawa (Yoriko Yasaka in Haiyore! Nyaruko-san), Chiwa Saito (Aika in Aria the Natural) and Kenichi Suzumura (Atori in Noein). The latest instalment of Kyousogiga will see theme joined by Akira Ishida (Judeau in the Berserk movies). Here’s my excuse to use this image again.

Beyond the Boundary (Kyoukai no Kanata)

Akihito Kanbara may be a high school sophomore student but he isn’t a normal boy because he is half youmu and invulnerable to wounds due to quick healing abilities. He meets Mirai Kuriyama who is a freshman at the same school when it appears she is about to jump from the school rooftop but he saves her. Mirai has the ability to manipulate blood which is unique even in the spirit world. After their encounter they become the focal point of disturbing events.

Kyoto Animation make lots of “slice-of-life” anime like Tari Tari where cute girls do things etc. I don’t watch that type of thing. There last major title was Free, an anime full of sinewy slim guys in a constant state of undress swimming to a dubstep soundtrack which was aimed at a female market who lapped it up. In short I don’t watch their stuff even if it is brilliantly animated.

Their latest title is a supernatural one?

Ooohhh, you guys! I can’t resist supernatural tales. It’s supernatural stuff in school like Red Data Girl and it looks like it’s going to be just as good looking if not more because KyoAni are bringing their considerable animation expertise to an adaptation of Nagomu Torii’s original light novel and the trailer looks awesome.

Oh gosh, that animation is f*cking awesome. This is going to be Hyouka all over again… screencaps every ten seconds… The director is Taichi Ishidate (Hyouka) and series composition comes from Jukki Hanada (Steins;Gate). Kenn (Phinks in Hunter x Hunter) voices Akihito and Risa Taneda voices Mirai.

There are so many great titles coming out in the Autumn season that I’ll be watching more than these four. I’ve got my next list coming out next month.