No Matter How I Look at it, It’s Yous Guys’ Fault I’m Not Popular (Watashi ga 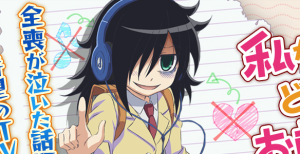 Tomoko Kuroki has never been a popular girl and is quite lonely since she spends most of her time playing otome games (maiden games) where the female characters are the centre of attention and get a hot guy at the end. Although she’s brilliant at Otome games, those skills don’t translate into the real world with real guys.

But she tries! With her entry into high school she dreams of becoming as popular as the protagonist of one of her games and developing a romantic connection with a boy.

She aims to achieve her goal by becoming sociable by any means necessary but breaking out of her shell is proving harder to do than she thought. Merely talking to others leaves her in a state of panic and every time she is ignored or rebuffed she falls further into depression. Can she break the cycle of loneliness and negative thoughts and blossom?

Three episodes in and it’s looking very unlikely but I hope to God she can because this is making me upset. 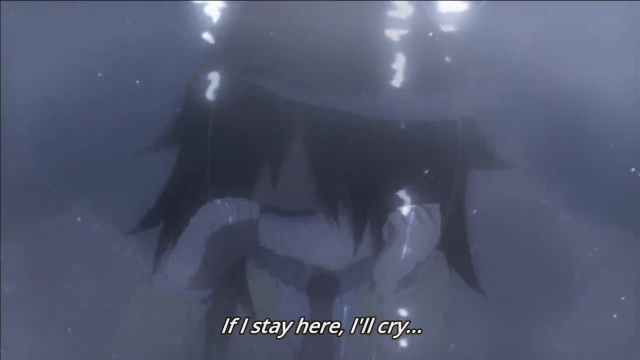 I had no idea what to expect when I first watched the opening episode and lazily thought this would be a comedy with a misanthropic protagonist, sort of like My Youth Rom-Com. It is a comedy but this is so dark I’m sort of left staggered at moments. It’s funny, too. Hilarious at times. Mostly dark and very tragic.

Tomoko Kuroki is maladjusted to say the least. An outcast with literally one friend who plays videogames all day. She sounds like a hikikomori but she’s not. She’s not bullied. She’s not abused. She’s a normal, decent looking girl with a caring mother and father and a brother who listens to her (not that he wants to) but she suffers from huge social anxieties surrounding her popularity and has an unhealthy neurotic personality and is given to moments of paranoia that keeps blowing things out of proportion. 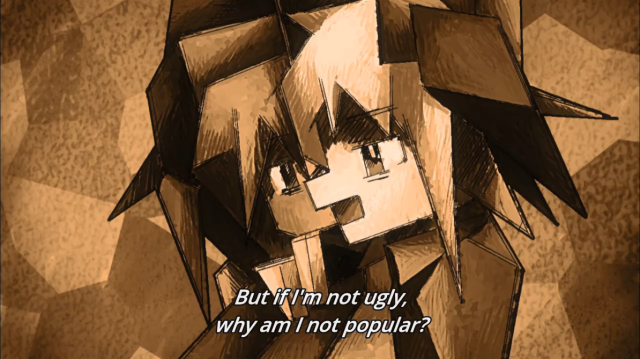 Okay, she’s a bit of a nerd who likes to dream that she’s Kusanagi from Ghost in the Shell and she likes listening to her Yandere Boys Verbal Abuse CD and playing on her Nintendo DS and watching anime but there’s nothing wrong with that.

She’s at the adolescent stage where everything revolves around her social life in school but it’s taken to an unhealthy level and I think she might be on the verge of mental illness. Or maybe it’s a sly comment on how the cult of high school that the media (especially anime!) and society promulgate might create people with such problems.

This is nothing like My Youth Rom-Com. Hiki in My Youth Rom-Com understood and embraced being an outsider. The anime set his point of view and loner mind-set up, compared it to others and respected it. He could function in society and would never consider himself a loser. The emphasis here is showing Tomoko’s inability to actualise anything like a normal persona and being able to function in society. Her anxieties are reasonable ones we all have (are we popular, are the opposite sex looking at us?), unfortunately her mental state is such that not being popular is something so crushing for her that her every thought and action is coloured by it. The more she feels rejected, the worse she feels and the more twisted her perception becomes.

The anime excels displaying this. Every aspect from the opening theme through to the end one. The animation is always ready to flip into some ironic take on superflat kawaii Japan or some abstract and cubist horror to show the world from Tomoko’s perspective and it’s hilarious, tragic and f*cking horrible. Izumi Kitta’s vocal performance with her croaky voice that threatens to break at moments of great stress or joy which are spurred by everyday meaningless exchanges and situations is another aspect which is effective. Not since Mayuri in Steins;Gate has a voice actress gripped my heart so much that I wanted to step in and save her.

Tomoko is so wrapped up in her feelings she often imagines she has some sort of negative aura around her that pushes others away. 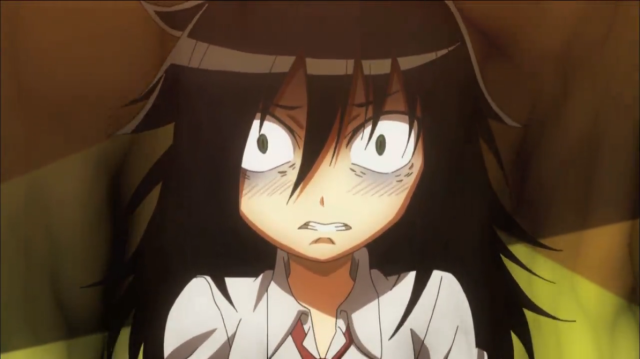 Even when she does try to reach out to others it goes wrong or comes off as crazy. She changes her appearance but looks awful, she tries doing new things like eating more at breakfast and vomits her guts out, and she begs her more popular brother to practice conversations and threatens to commit suicide if he refuses.

She desperately wants to be normal and have some attention but everybody has a life of their own and when she finds that out, when she’s ignored, she spits out nothing but venom making her feel worse and others awkward. Actually, she’s not a nice character either…

She frequently mentally inserts her own perverted and angry dialogue on other happier peoples’ conversations and she is quick to think up insults for others who don’t see her.

As the title cleverly shows, she is so wrapped up in her feelings she is ready to blame others which adds a lot of grit to the show. We know there are no easy answers to solving her lack of popularity. There is no club to help her or magical wand to grant her powers. Nobody is going to step in. Her problems are self-made and she will have to dig deep to overcome them which means she will have to become a stronger person.

Each episode does hold out hope and reveals to Tomoko that she’s not alone but she’s unable to see it. The second episode in particular is effective when she finds out that her old friend, the nerdy meganekko (glasses-wearing) Yuu from middle school wants to be around her and be her friend. Fantastic until Yuu shows up and Tomoko sees that she’s good-looking and fashionable. Fortunately she’s still the same nerd who loves anime and games she always was and Tomoko has someone she can talk to. Then something will come to crush that like the revelation that Yuu has a boyfriend and is more normal than expected. For an audience we see hope. If Yuu can change, so can Tomoko. Tomoko is so blind she is just crushed by Yuu’s changes.

Watching this feels stifling and uncomfortable as we see the gap between Tomoko’s perception and reality and the bathos involved.

At the end of each episode I wanted to tell her to relax, that she’s fine. Whether or not a person that obsessed would listen to me or anyone is another matter. This has come out of nowhere to be one of the funnier and emotionally engaging anime out there.

7 thoughts on “No Matter How I Look at it, It’s Yous Guys’ Fault I’m Not Popular First Impression”