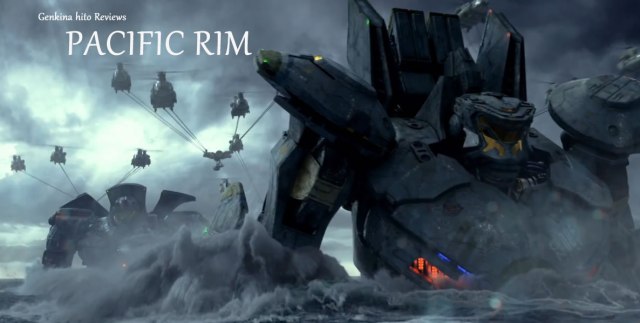 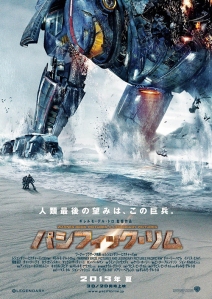 I like Guillermo del Toro films. I’ve seen Hellboy 1 & 2, The Devil’s Backbone, Chronos and Pan’s Labyrinth in a cinema. Deep down he’s a fanboy like me, a guy who grew up reading and watching everything from anime to gothic fiction. Pacific Rim reflects his love for the distinctly Japanese mecha and kaiju-eiga genres. Giant robots vs giant monsters. Think Gigantor vs Godzilla. I know my mecha. I grew up in love with tales like Patlabor, Evangelion, Gasaraki and Macross (not so much Gundam) and I’m partial to a bit of giant monster carnage so trust me when I tell you that this genre mash-up is God-tier.

Warning, this is a long babbling review listing loads of stuff I loved and loads of Gifs that I created to celebrate it.

Humanity expected alien life to come from the stars but instead it came from an inter-dimensional portal in the Pacific Ocean. These aliens were giant monster who caused widespread destruction as they attacked San Francisco, Manila and other coastal cities around the world. They were termed Kaiju.

Humanity responded with the Jaeger programme, giant nuclear-powered walking robots that could equal the power of the Kaiju. Controlling these machines placed a tremendous mental strain on a single pilot so two pilots were needed to share the mental load by joining their minds together in a connection established by The Drift, a mind meld that shares memories and thoughts. The stronger the connection between the two pilots, the better the performance of the Jaeger.

Raleigh (Hunnan) and Yancy Becket are brothers and hot-shot superstars in their Jaeger Gipsy Danger but a tragic event happens in battle leaving Raleigh the sole survivor. Things get worse as more and more Kaiju are teleporting in and destroying the Jaegers while Earth’s governments are cutting funding of the Jaeger programme. Raleigh is devastated by his loss and he retreats from the world but is called back by his former commander Stacker Pentecost (Elba) and Mako Mori (Kikuchi) who are pulling together the last of the Jaegers to Hong Kong for a last ditch attack on the portal in the Pacific. Raleigh is faced with having to get over the loss of his brother and has to work quickly with Mako Mori to get back into the fight as humanity makes its last stand.

First of all, the visuals are like a sugar-rush overload for an otaku and anyone who loves a spectacle. I was frothing at the mouth because the world of Pacific Rim, from set design to cinematography, is delivered with visual aplomb and such great attention to detail that it beats Hollywood films like Avatar in terms of its looks. The visuals are bright and dazzling and blaze with life. Although a lot of action takes place in the sea or at night, there are always different shades of light and dark and seeing them mix creates flashy highly charged tone that pulses with energy with all sorts of colours picking out details in the dark and keeping track of the action is never a problem.

The sense of scale is brought home magnificently in every shot. Most commonly it is given by the way the mecha and monsters travel through neon cityscapes. Imagine seeing huge monsters striding over you as they toss debris like cars and bridges around them (usually at the camera) and carve their way through modern cities. It can be pretty dizzying. Now imagine seeing towering robots heft a huge oil-tanker for a sword before beating the monster into a pulp. It can be pretty awesome. The camera is always in the right place to convey the scale of the action from the coolest point available. There is also so much military porn going on from the ranks of assembled soldiers to jets and helicopters airlifting the Jaegers that the little boy in me was too excited. The Shatterdome, the base which houses the Jaegers, is well-realised and like a more industrial NERV headquarters with its huge hangers, and its control room packed full of colourful computers.

The Kaiju are some of the most imaginative beasts seen on the big screen in a long time. Forget the monster in Cloverfield, these precision-engineered weapons that range from category-1 to 5 and are all modelled on the plodding heavyweight sea beasts and dragons seen in classic kaiju-eiga. Quite frankly, watching these things in action was gut-churning not least because their sense of scale and destructiveness was so well-captured. Just because they come from the sea doesn’t mean that they are stuck there. The whole roster is made up of brutal brawlers and there are large differences in terms of the way they each move and fight. Some have thick armour with protruding spikes, some spit acid and shoot electro-magnetic energy and all have no problem tearing through a city and getting into a wrestling match! Seeing these blighters square up for a round of destruction is truly terrifying especially given the high impact the visual and aural aspects of the film. They crash and bash their way through cities and let out screeching cries and can be quite intimidating to watch. 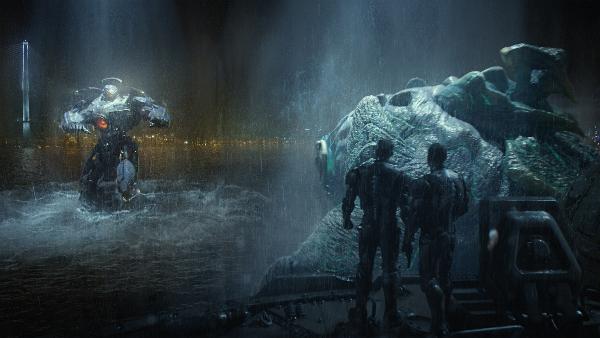 Thankfully humanity has an answer to this alien onslaught in the form of Jaegers and their brave pilots. With cool World War II sounding names like Gipsy Danger, Crimson Typhoon and Striker Eureka, these giant mecha reflect the country that built them with the Russian Jaeger looking like a Soviet era factory, huge fists and heavy armour and the American one looks flashy and stylish. They also have a variety of weapons like chainsaws and plasma cannons but tend to go in with fists (propelled by rockets!) flying. It’s totally fun watching the giant combatants fight and satisfying when seeing Gipsy Danger and the other Jaegers deliver a haymaker. Expect to hear much metal grinding and crashing! It wasn’t all about looking cool though as a real sense of danger and vulnerability was felt on the part of the pilots during the fights. The monsters strike hard and unexpectedly and seeing humanity’s defenders panic and get overwhelmed was pretty grim stuff. One of the themes of the film is humanity working together and the designs and ideas in the show come together perfectly as can be seen in the next image.

The visual splendour and detail extends to the insides of the Jaegers with different styles depending up the type. The pilots suit up in sexy plug suits that rival anything in anime. If the giant robots were to be built in real life then this is a pretty convincing demonstration of how they can be controlled with the harness systems and an AI that sounds straight from the videogame Portal 2. Seeing two pilots work as one in their harnesses was cool and it brought home the amount of synchronism that would be required. Seeing their moves replicated by the Jaegers was even cooler.

Let’s be clear now, this is a beat-em up not a bleakie or a high class drama. Giant robots and monsters battle and it looks totally cool. Do we care? Thanks to the pilots, we do!

Jaegers are only as good as their pilots

The cast is pitch-perfect. For once in a big screen blockbuster I cared about the cast as much as the visuals and action. Another thing that I really liked about the film was the genuinely international cast with all sorts of nations like the US, UK, Australia, Japan, China and Russia represented. It’s a very diverse group and it’s not just square-jawed military types as well as we get black-marketeers (del Toro regular Ron Perlman in a humorous role), a toff English scientist (I say!) and normal citizens from Hong Kong. Seeing all of their stories gave a greater sense of the world which reinforced the feeling of being under siege and having to unite.

The entire cast of characters are likeable and have cool names. Charlie Hunnan as Raleigh Becket is probably one of the most likeable heroes in a big special effects movie I have seen. He’s a good-natured and good-looking without being bland. A relatable guy who you root for and believe could pull the world from the brink of an apocalypse.

Idris Elba as Stacker Pentecost is both fierce and intelligent but can convey enough vulnerability to humanise his character. He gave of Gendo Ikari vibes with his enigmatic behaviour but he is capable of making mistakes and seeming uncertain. Fortunately, he can also listen to others around him. After witnessing his strong physical presence (who else could square up to Charlie Hunnan?) and after listening to his speeches, I think you’ll agree that we would want him to be the guy leading humanity’s resistance.

Rinko Kikuchi as Mako Mori has to be one of the best female protagonists going in recent sci-fi. She is just as tough, dependable, intelligent and as fierce as the men and is not reduced to just being the girlfriend in a tossed together love story. She is an equal to the guys and actually surpasses many, if not all of them. Although the narrator is Raleigh Becket and we follow his story, we get more of an idea of Mako Mori and her background. She gets to go through a training arc, overcome personal demons, struggle and survive against all sorts of emotional and physical turmoil. She also gets to ogle Raleigh when he’s half-naked instead of it being the other way around. She’s a strong female! Rinko Kikuchi convinced me that she was a brilliant actress in Norwegian Wood and she has now ascended to the top of my favourite female protagonists with her performance here. On top of looking good in a plug suit, she comfortably displays a range of emotions ranging from dutifulness and diligence to a good-natured crush.

The whole ensemble are perfect!

Overall I enjoyed the movie so much I have been dreaming about it. I can imagine people expecting Pan’s Labyrinth will be disappointed but then they should have watched the trailer. The film has more heart and intelligence than your average sci-fi blockbuster like Transformer and Avatar and is a good-natured and earnest attempt at bringing too seriously cool and overlooked film genres to a mainstream audience. Everything flows smoothly and the visuals are spectacular. Guillermo del Toro has created a film dripping with love for classic monsters and robots, a great live-action anime. If Evangelion were to be made, del Toro would be the man for the directing job. Don’t expect anything too complex from the script, just go in for the action and spectacle and have fun!