Ah! Summer. Although I hate the heat I feel the potential of life now more than ever before. This week has been quite a good one. Nice weather, eating out and work has been fun because I met Japanese and Spanish people during/after work and babbled about films in Japanese and Spanish while I was all dressed up kind of like Ryan Gosling in Only God Forgives, white shirt, black trousers, tie and all). Speaking of work (and getting back to films), I joined the film club and have managed to talk the organisers into screening anime and Japanese short films! Potential!

It’s weeks like these I appreciate life and what I have so I’ll try and up the work rate. I managed a good rate of anime with Sunday Without God episode 2, Attack on Titan episode 14 and It’s Not My Fault I’m Unpopular episode 2. I watched some indie Japanese flicks and Source Code. Even better and I even got to watch Pacific Rim which was fun and appealed to the mecha fan in me and it reminded me that Rinko Kikuchi is a great actress and a goddess. Expect more first impressions and film reviews as I round-up reviews from the Terracotta Far East Film Festival (at the insistence of someone important) and start covering newer Japanese films and doramas. This week I posted about Gatchaman Crowds which is awesome and did a spring 2013 anime round-up. 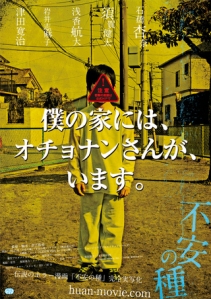 J-HORROR! This looks so damn awesome! Ah, a horror manga adaptation! This omnibus movie comes from Toshikazu Nagae (Paranormal Activity 2: Tokyo Night) who is adapting Masaaki Nakayama’s horror manga collection which is full of creepy tales. How do I know? I actually remember some of them, so they must have been effective. It stars Anna Ishibashi (Milocrorze – A Love Story), Koudai Asaka (The Kirishima Thing, Lesson of the Evil) and Kanji Tsuda who has worked with great directors like Beat Takeshi, Takeshi Miike and SABU.

When a motorbike accident occurs it unleashes a series of strange phenomenon which Yoko (Ishibashi) can see.

The Flower of Shanidar 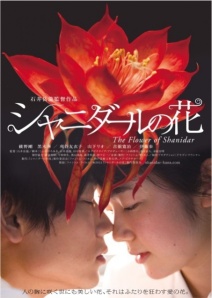 I have reviewed two films by Gakuryu Ishii and they were both hugely different. Isn’t Anyone Alive? Was a slow moving quiet Armageddon film while Angel Dust was a deliciously twisting serial killer thriller. Unlike someone like Kiyoshi Kurosawa who is quite easy to identify from his visuals, Ishii’s diverse range of films are hard to categorise. This one is even more different than expected, a quiet sci-fi romance. It stars Gou Ayano (A Story of Yonosuke), Haru Kuroki (Tokyo Oasis, The Great Passage, The Wolf Children), Kanji Furutachi (The Woodsman and the Rain), Ayumi Ito (Penance)

The Shanidar Institute is is home to a strange process where a beautiful flower blooms on a selected woman’s body. These flowers go under the name Shanidar  and when they are n full bloom they are harvested and sold to drugs companies for high costs. A rookie botanist named Otaki (Ayano) and his colleague Kyoko (Kuroki), who is a therapist, both work for the Shanidaru Institute. They come to question their employer when it comes to light that constantly harvesting these flowers causes great strain on and even the death of the women hosting these plants. 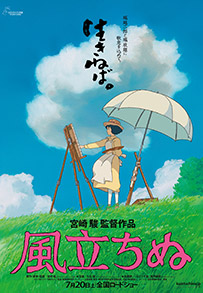 This is the big release for many. It has been five years since Hayao Miyazaki’s last film, Ponyo on the Cliff by the Sea. Since then he has written scripts and manga. He’s back with a new film which tells the story of Jirou Horikoshi, the designer of Japan’s famous Mitsubishi A6M Zero fighter plane of World War II. We witness his upbringing and his struggles with poverty, an earthquake and war and his relationship with a woman named Naoko Satomi who is suffering from tuberculosis. Jirou Horikoshi is voiced by Evangelion creator Hideaki Anno. He is surrounded by live-action actors like Hidetoshi Nishijima (Zero Focus), his co-star Miori Takimoto (Sadako 3D 2, Rinco’s Restaurant). UPDATE: Alua posted the full trailer which will be found below.

With the full trailer I get a better sense of the film and the story I’m more excited about it than I previously was. 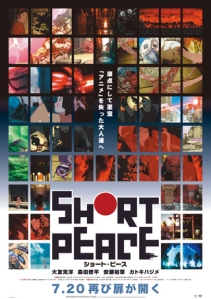 Short Peace is an omnibus film which collects four short films directed by four different directors. The biggest name is Katsuhiro Otomo (Akira, Steamboy) who also directed Mushishi. Other directors attached to the project include Shuhei Morita who handled part of the freedom OVA, Hiroaki Ando who was CGI director on Steamboy.

The stories are all about the theme of Japan and stretch from a tale of a controversial marriage that ends in a fiery blaze in Edo era Japan to the tale of a man lost deep in the mountains who encounters Mononoke, a terrible demon during the Sengoku period. The other stand out looking tale is a sci-fi one set in Tokyo in the near future where a platoon of soldiers encounter a mysterious weapon.

The guys behind the Kaidan Shin Mimibukuro Nagurikomi! Are back again after last week’s foray to Okinawa. This tie they are hunting for ghosts on Miyako Island in Okinawa prefecture.

Things Left Behind/Those Who Were Bereaved by Hiroshima

Linda Hoaglund is an American director/producer who was born and raised in Japan by her missionary parents. She has many links to the country’s film industry including the fact that she was subtitler for Tokyo Sonata and Bright Future, Spirited Away and After Life, four awesome films! Her documentary (according to IMDB), Things Left Behind explores the effect of Hiroshima through an international art exhibit devoted to the atomic bomb that took place at the Museum of Anthropology in Vancouver, Canada. It featured 48 large-format colour photographic prints of clothing once worn by victims of the bomb. These pictures were taken by Miyako Ishiuchi who went through the Hiroshima Peace Memorial archive to get the pictures. Here’s a video from the exhibition that gives an insight into what might be seen. Here’s Linda in an interview about the film.

A bit of psycho-geography! Floating along the Tama River in Tokyo is an old man and a boat load of dogs. Said old man repaired a motorboat and lives with his dog Soleil and sail up and down the river which flows out into Tokyo Bay. We see his world view and the changes in the landscape. 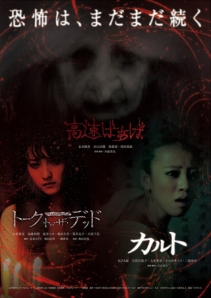 J-HORROR! Koji Shiraishi loves scaring idols in his horror films. Noroi the Curse featured idols, White Eyes featured idols and the Ada Senritsu hen/Ada Zetsubou hen films released last week featured idols. Seeing pretty girls get chased by ghosts can be pretty fun. In this film  Mayuko Iwasa (Milocrorze – A Love Story) is a reporter who covers the exorcism of a mother and daughter. NEO is the psychic conducting the exorcism but the spirit proves far more powerful than anybody anticipated. This looks like fun.

GARO Side Story: Whistle of the Phantom Peach

I posted a GARO trailer earlier this year and it has proven to be quite popular. Keita Amemiya’s tokusatsu title gets a sequel. This is the fourth movie according to the GARO wikia and it is set after the events of Makai Chronicles and concurrently in Demon Dragon of the Blue Cries (the last GARO film), this story focusses on the adventures of the Makai Priests, Jabi (Sato) and Rekka (Matsuyama), masters of magic and medicine, as they journey towards the northern forests to protect the mystical Whistle of the Phantom Peach.

Not too sure about my translation but from the details this is that it’s a collection of stories about the last moment in the lives of various people. It’s directed by Satoshi Takagi who wrote the screenplay for the horror flick WiLD ZERO (wow, that’s going back some years) and stars Takashi Yuki (Tokyo Island, Into a Dream) amongst others. 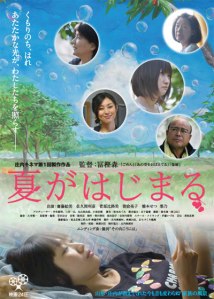 Shin Togashi is directing the big screen adaptation of Oshin which will be released later this year. That’s a historical drama. Before that, he gets this short film out with a bunch of unknown actors. This is a very contemporary tale about a dysfunctional family. It all starts when the parents’ divorce and the kids are split up with the grandmother looking after them until she is put into a care home with dementia. People marry, get into debt and the main protagonist simply longs to move away to Tokyo to get away from it all.

15 thoughts on “The Flower of Shanidar, Fuan no Tane, Seeds of Anxiety, The Wind Rises, Kaze Tachi Nu, GARO Side Story: Whistle of the Phantom Peach, CULT, Children of Soleil, Things Left Behind/Those Who Were Bereaved by Hiroshima, Short Peace and Other Japanese Film Trailers”