Well with my new position in work I am in the gallery longer than is legal (I think) which explains why this post is late but I still have time to watch anime and dorama! Alright, not as much as I like but at least I’m going to get paid. This week I watched Gatchaman Crowds (which is awesome and made me happy), Dog and Scissors, It’s Not My Fault I’m Not Popular (tragically funny) and two episodes of Penance (intriguing and a reminder that Eiko Koike is a fox!). Four totally different shows and all pretty good. I also tried watching Free! but lost interest because I’m not a girl. I wrote up my first impression for Dog and Scissors and announced the arrival of my Tumblr blog. I hope to continue my first impressions going next week.

A lot of films released this week and few of them are all that spectacular. The Berlin File is also released… So yeah, a bit slow.

Nobuhiro Yamashita, director of the Drudgery Train is back with a rock documentary about Elephant Kashimashi. This documentary that plumbs everything from their debut to recent work in 2012. Expect interviews with the band and collaborators and behind the scenes footage. 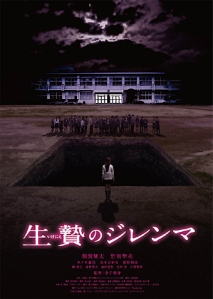 The day of graduating from high school should be a happy one for Junichi Shinohara (Suga) and his friends but when a voice over the school’s intercom announces that everyone will die in an hour it is understandable that people are pretty terrified. Terror turns into desperation as the prospect of survival is handed to students as they are given a way out by sacrificing one of their number. 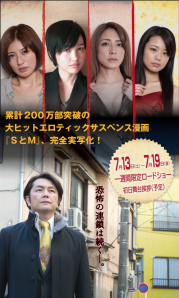 Type Mio Murao into Google and you can see the clean bits of the mind of an S&M obsessed manga-ka. I haven’t read her but there’s a lot of girls in peril and tied up and it all sure as hell comes under the S&M. She must be popular because this is the second live-action film adaptation of her S&M erotic suspense manga where a chap named Toda (Miyauchi) has managed to save his company and his marriage from the ruin of an affair with Saya Amami (Kawamura) but Amami isn’t finished with him yet and she’s going to use someone close to Toda to take him down! Warning foxy Japanese women in steamy positions ahead.