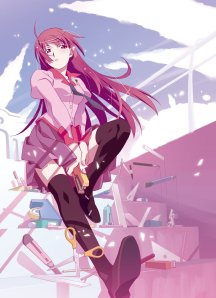 Well my holiday came to an end and it was back to work and I haven’t been as busy as this week had me. I got a bit of a surprise this week as well when I collected my post and excitedly got my Bakemonogatari DVD (just released in the UK) then checked my emails and saw a press release from the UK distributor asking AUKN to report that the Bakemonogatari set has the wrong discs in thanks to a mix up with the manufacturer. I now have Shakugan no Shana II instead of Bakemonogatari. It’s pretty bland. I want my Bakemonogatari. I want Hitagi Senjougahara.

The week opened with my Summer Anime Season Picks on this blog and on Anime UK News. I feel sad about the spring season passing but the summer shows I picked look pretty good. I followed up with a post showing the auditions for Sion Sono’s latest film Tokyo Tribes and a lot of the trailers were fun rather than cringe-worthy.

What films are released today?

The Ravine of Goodbye

Tatsushi Omori is an interesting director. He’s worked on The Whispering of the Gods and Tada’s Do-It-All House, two interesting films, the first a drama and the second a comedy. His latest flick is Bozo which stood out as being a grim take on the real life incident of a loser who goes on a murder-spree. Omori’s name should be better known amongst cinephiles. This is his latest film and he’s adapted a novel by Shuichi Yoshida, the man who wrote Villain, Parade and The Story of Yonosuke, all three of which were turned into films. As the trailer shows this is going to be an emotionally intense film full of tears and shouting. The plot sounds really melodramatic and it makes me want to see this on the big screen! I’m also interested because the acting talent is immense with the director’s brother, Nao Omori who is a bloody good actor considering his roles – Ichi the Killer, Vibrator, Mushishi,  Rampo Noir – Yoko Maki (Infection, The Grudge) Anne Suzuki (she had a bit-part as a waitress in Himizu but was so beautiful I remember her clearly!) and Arata (After Life).

In a valley dense with trees a baby is killed and it’s mother, Satomi Tachibana (Suzuki) is the primes suspect. As the police are investigating the murder they are informed that Satomi is romantically involved with her next door neighbour Shunsuke Ozaki (Onishi), a man who seems to be happily married to his wife Kanako (Maki). Magazine reporter Watanabe (Omori) digs into the case to find out the real story and discovers that a strange connection exists between Kanako and Shunsuke which changes his perception of the truth.

And now for something completely different. This looks incredibland to me, a person who has grown up on horror and action. I guess regular dorama viewers will fit in perfectly but the trailer and plot put me off. The central couple looks so cute. The settings are picture perfect. The music is a cheesy ballad. The strange thing is that fact that it’s directed by Ryuichi Hiroki (River, April Bride) who usually makes more interesting dangerous films so forgive me if I say that this looks like a project designed to buy him a new boat. But maybe I’m wrong. There are great actors here like Jun Murakami (Land of Hope), and Ren Osugi (Exte) and recent discoveries like Haru (See You Tomorrow, Everyone) and Yoshiko Miyaaki (Detroit Metal City)… This could be secretly great and another look at the trailer will convince me… Or maybe they all want boats as well. Perhaps they all have memberships at the same yacht club. I’m not convinced. The next trailer better be an awesome action movie.

Shichichi (Okura) had a motorcycle accident 4 years ago and slost a year from his memory. While at a friend’s wedding, Shuichi meets Yoshimi (Kiritani) and the two fall for each other. Shuichi even considers trying to wife Yoshimi until she becomes sick and reveals a sad truth lost in Shuichi’s memory…

No action movies. I just checked the rest of the releases and it’s all dramas and documentaries. They look good.

The first post Alua made for 2013 contained the trailer for this film and I commented on it stating that:

“I liked the trailer for Shady. It reminds me of the K-horror Memento Mori. I’ll make Gifs out of that…” Genki Jason

Ah, the things I promise to do. Well I have made a Gif which is at the bottom of this post. What? You want to know about the film that reminded me of Memento Mori?

Okay, this is an award winning youth drama about Misa Kumada (mimpi * β), an outcast at her school who hates the place but would like to get closer to Izumi Kiyose (Okamura). The two develop bonds of friendship but the seemingly angelic Kiyose has quite a dark side. Do I still want to see it? Yes. Thankfully Third Window Films have acquired it for UK distribution! 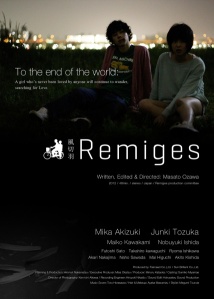 Remiges? A flight of feathers of a bird’s wing. A bleakie road movie… I have to invoke the name of Alua again because this is her type of film. Abuse, bullying, horrible parents and the trauma that has created in lead character Sayako which leads to an interesting character study. It looks to get even more interesting when Sayako hooks up with another outcast named Kenta. The film actually gets a bit of a playful tone when he enters but such things don’t last in the real world. With its outsider pair it reminds me of Aku no Hana only Kenta isn’t a spineless nothing like Kasuga. Damn, I want to Gif this as well. Lead actress Mika Akizuki starred in Another while lead actor Junki Tozuka appeared in Helter Skelter. Those two look really good (especially when compared to that film about crying 100’s of times or whatever…)

Sayako (Akizuk) was abused by her mother as a young child and has lived in a foster care facility with the emotional scars since then. She’s now a senior in high school and wants to attend a ballet school but she needs her parents to pay the tuition fees and so she turns to her father but he betrays her and pushes Sayako over the edge. She skips out on the foster care facility to search for her mother and sister but runs into another lost soul named Kenta (Tozuka) who cycles through town asking random people if they know him. 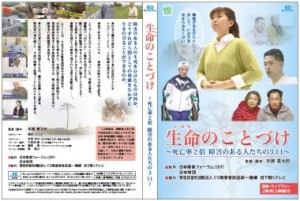 From what I can make out of the synopsis it seems to be a video made for people with a wide range of disabilities to prep them for natural disasters. Spurred on by the 3.11 disaster there are facts collected by local government and media organisations and interviews with disabled people plus there are multiple ways of understanding the info from subtitles, audio description and sign language. 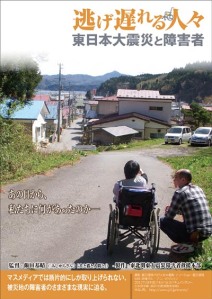 We’ve had 3.11 documentaries about children, old people, and animals and now we get one about disabled people. This depicts what happened to people with disabilities, the problems they had evacuating, the problems being housed in temporary shelters and the stories of those who were left behind in the Fukushima area after the nuclear accident. It comes from Motoharu Iida who did the doc on animal survivors of 3.11. No trailer. 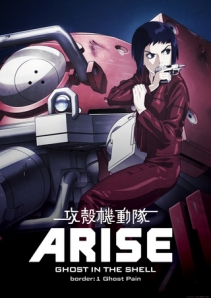 If I had to pick a favourite anime genre then it would be cyberpunk. I grew up on 80’s/90’s anime and I’m a big Ghost in the Shell (GitS) fan… Well, the Mamoru Oshii films rather than Shirow Masamune’s manga and the Stand Alone Complex TV anime. Oshii has a unique existentialist take and knows how to create worlds and I mention this is because the latest adaptation of Shirow Masamune’s title is out courtesy of Production I.G. Here’s the first eight minutes.

Character designs come courtesy of the series director Kazuchika Kise but I’m always up for an adventure with Kusanagi. The first episode is directed by Masahiko Murata (Serial Experiments Lain) and the series is overseen by Kazuchika Kise, a Production I.G. vet who has been in everything from Patlabor to A Letter to Momo. The one point of interest is that it is written by Tow Ubukata who has created fascinating works like Samurai Astronomer Tenchi, Mardock Scramble and Le Chevalier D’eon. Plus there is music by cool DJ Cornelius. Anyway, this instalment introduces Kusanagi and Public Security Section 9… because a new audience needs to be reacquainted with old heroes.

This is part two of a trilogy of documentaries celebrating BUCK-TICK, an immensely popular rock band celebrating their 25th anniversary. Like the last one it includes footage from past performances, their tours during the year 2012 and album recordings.

It’s a Glass Mask But… Love of a Woman Spy!

The shoujo romance manga has been adapted into a gag anime TV series by DLE Inc., the company behind the Thermae Romae anime. The original characters have been reimagined as “yankee” (Delinquent) girls who both want to lead the “Crimson Godess” gang.

Final Fantasy illustrator Yoshitaka Amano has made films before with Ten Nights of Dream and this is his latest, a children’s anime adventure featuring fairy vegetables from a New York Salad teaching kids and singing nursery rhymes in a kitchen in New York. Narration by Tomoyo Harada (Tokyo Oasis, Bread of Happiness).

It has been twelve years since the death of Haruo Minami and now we get concert footage which has not been recorded on DVD and has been given the HD remaster treatment. He was a popular enka singer who led a dramatic life surviving a Russian POW camp and performing the theme song for the 1964 Summer Olympics in Tokyo which is included in the film.

For 13 days of roaring and Muneoizumu love

A documentary about the controversial politician Muneo Suzuki, a former member of the Liberal Democratic Party and a pretty big-wig who was convicted of corruption and set to prison for a brief spell.

Goto Toshihiro, director of Monochrome Girl and The Melancholy of Vermeer, is back with his latest feature which is a relationship drama starring Toru Katayama (Watch the Birdie) and Yuria Hidaka (Siren X). Looks a bit dull.

Taro and Yoko have been in a relationship since high school and have lived together for 10 years but when Taro gets into an incident with another woman Taro and Yoko realise their feelings for each other have changed.

September 18th, 2012 and a week has passed since the Senkaku islands have been bought by the Japanese government from their Japanese owner. Nationalist demonstrations take place across China and the Chinese government refuses to recognise Japan’s claim on the islands. Tensions mount between China and Japan and while all this is going on in China two Japanese men land on the islands and spend 36 hours there. Their intention is to show the love and pride of modern Japanese. One of those men is the rock artist TOKMA and this is his experience.

Enough with the politics. Here’s the Gif:

8 thoughts on “The Ravine of Goodbye, To Cry a 100 Times, Shady, Remiges, Ghost in the Shell: Arise border 1 Ghost Pain, Movie Version BUCK-TICK Firecrackers Phenomenon II, It’s a Glass Mask But… Love of a Woman Spy!, and Other Japanese Film Trailers”