My Youth Romantic Comedy is Wrong as I Expected 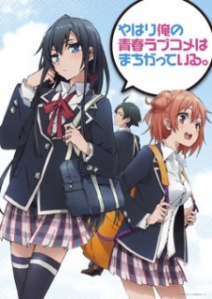 Ha, the second anime I viewed from my Spring Preview Picks turned out to be this one with an elaborate title My Youth Romantic Comedy is Wrong as I Expected (Yahari Ore no Seishun Love Comedy wa Machigatteiru). It catches the attention of everyone I mention it too. I loved it so here is a long post full of images like Attack on Titan. I’m keeping it relatively simple with plenty of images to avoid boring you guys to death.

I totally underestimated how smart the show would be. Anybody who loves school-based anime and those cynical about such things (and life in general) will find something here.

Japanese writers and directors manage to capture how I feel as a person far better than anyone from a culture closer to my own. The comedy Fine, Totally Fine brought home to me everything I feel and some of the ways I act in my post-adolescent drift towards adulthood while the central character in the anime My Youth Romantic Comedy is Wrong as I Expected was pretty much cynical me during high school… well a more extreme outsider version of me…

The anime follows Hikigaya Hachiman who is a pretty antisocial high school student with no friends or girlfriend and a very, very cynical view on life.  His thoughts on those fellow students taking part in clubs and activities and falling in love are not kind: The people who enjoy their youth will eventually fall apart.