The Tohoku Earthquake and Tsunami which occurred on March 11th, 2011 had a devastating impact on the people and places of Eastern Japan. It is two years since that day and while recovery is slow and memories are still fresh. The film world has been quick to use the disaster as subject matter for documentaries, short films and features. The Japan Foundation has organised two screenings of films to mark the second anniversary of the Great East Japan Earthquake. 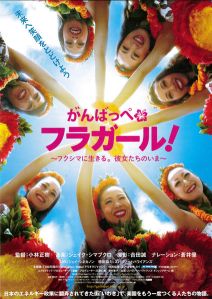 Following on from the successful screening of the hit movie ‘Hula Girls’ as part of this year’s Touring Film Programme ‘Once Upon a Time in Japan’, the Japan Foundation is delighted to present ‘Fukushima Hula Girls’, an uplifting documentary following the real-life hula girls from the Spa Resort Hawaiians in the Fukushima Prefecture.

Having suffered damage from the Tohoku earthquake of March 2011 including their performance stage, the film shows the Hula Girls’ efforts to revive their business through the resort’s national hula dance tour.

Narrated by ‘Hula Girls’ star Yu Aoi, this documentary shows the girls’ determination and resilience in building a brighter future for Fukushima. 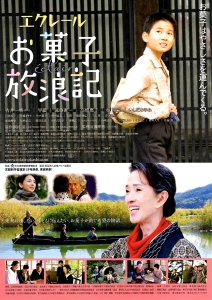 Based on the autobiographical novel by Shigeru Nishimura and set around the turbulent period of the Second World War, ‘Éclair’ tells Akio (Hajime Yoshii), a young orphaned boy with an obsession for all things sweet. After being caught for stealing a bag of sweets out of hunger, Akio is sent to a reformatory and experiences a tough time, but finds solace through the song ‘Okashi to Musume’ (sweets and a girl) sung by one of the teachers, Yoko (Saori).

‘Éclair’ was shot in the autumn of 2010 in Ishinomaki-city and other places in the Miyagi prefecture. Many of the beautiful locations and historic buildings were swept away by the tsunami. The film offers a fascinating and wonderful insight into the area in which the film is set before the Great East Japan Earthquake. The film also perfectly complements this year’s Touring Film Programme theme of looking back into the past.

While looking for a trailer for the film Eclair I found a YouTube channel which charts the recovery efforts.