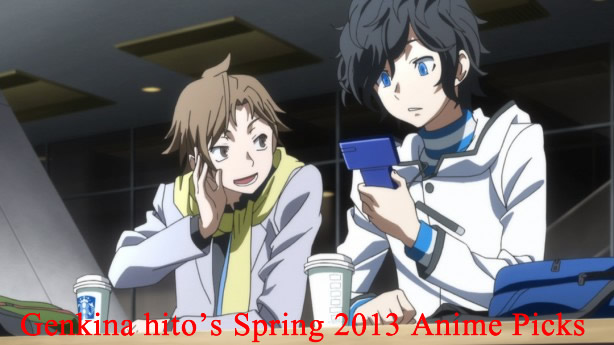 shows that will get aired in the spring season for Anime UK News. The preview features do prove rather popular and generate a bit of traffic. To make the features I essentially used one of the handy season guides that get produced and took to researching the details of the productions through various websites and then a whole weekend’s worth of writing with tracks from the Final Fantasy XIII OST playing in the background as I brought together notes, some of which had been made over the course of a year as a journalist for AUKN.

I plan to watch some of these and like last year I am going to announce what I will be viewing. This links in to my New Year’s Resolution to watch and review more anime. I got off to a good start last year but my efforts tapered off until the very end even though I was watching anime. I am a bit more on top of my game this time as I am taking a more aggressive approach to how I approach anime (and most things for that matter…) and watching and writing about them more often. Here is a list of shows I will at least watch the first few episodes of. Even though I am still watching on-going series like Maoyuu Maou Yuusha and Robotics;Notes as well as the recently released Blue Exorcist, I am going to tackle this set because they do look like the most interesting in the season.

Here is my Anime UK News preview guide (it is not as self-absorbed but is as long-winded as this)!

Japan is gripped by the invasion of mysterious creatures and it falls to a band of Japanese high school students who can summon demons themselves to fight back.

This is the second adaptation of an Atlus RPG property following Persona 4 The Animation, which I enjoyed even if I did not get the game in the end. This one is the recent Shin Megami Tensei Devil Survivor series seen on the Nintendo 3DS¹. This is the reason I am going to watch it because I want to get into the Persona series a lot more… It’s probably the wrong way to do it but what the heck. The director is Seiji Kishi, the chap who directed Persona 4 The Animation. Series scripts written by Makoto Uezu who has written for TV anime Humanity Has Declined which I thought was a brilliantly surreal and inventive anime.

Seiyuu involved include Hiroshi Kamiya, Aya Uchida and Kana Asumi. Hiroshi Kamiya voiced Riku in the great comedy Arakawa Under the Bridge and Kana Asumi voiced Nyaruko in Haiyore! Nyaruko-san, which I found rather amusing and an ironic fate for the works of H.P. Lovecraft. Actually, I might start watching that again… Anyway, other seiyuu include Yuka Iguchi (Tsukihi in the cool anime Bakemonogatari) and Daisuke Namikawa (Rock in Black Lagoon). Great voice actors! 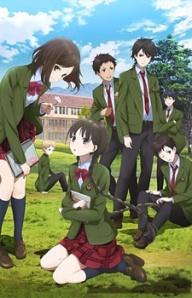 Izumiko Suzuhara is a 15-year-old girl who has been raised at the Tamakura shrine deep in the Kumano mountains. She desires to head to Tokyo to continue her education at a middle school but has a problem with electrical items because any that she touches are destroyed. Her guardian Sagara Yukimasa decides that his son Miyuki must serve Izumiko despite the fact they dislike each other. However after a terrible accident on a school trip and the appearance of a mysterious entity known as Himegami the two become close as a terrible secret is revealed and she has to serve an ancient deity.

Noriko Ogiwara’s story is based on Shinto mythology and while it does not look as action-packed as something like Ghost Hunt or Blue Exorcist I can see myself enjoying it for reasons I shall now explain.

The animation comes from the studio P.A. Works who produced Another, a series I liked a lot. Indeed I get a similar vibe to that anime, a slow unfurling supernatural tale with gorgeous visuals and character design, which is the main reason I am going to watch it. The anime is directed by Toshiya Shinohara (The Book of Bantorra) but the name that really interests me is the person in charge of series composition, Michiko Yokote who was the writer of scripts for Mononoke and Jungle wa Itsumo Hare nochi Guu and Patlabor, three anime I love and all with strong writing which just adds another reason for me to watch it.

Izumiko is voiced by Saori Hayami who was in the anime OVA One Off and voiced Sayo and she was also the voice of Saki in Eden of the East. She acts alongside Rie Kugimiya who was sultry and mysterious as Masako Hara in Ghost Hunt, and Jun Fukuyama who is great as the voice of Yukio Okumura in Blue Exorcist. I also found his sympathetic treatment of Rikuo in Time of Eve was one of the reasons I almost burst into tears at the end of the anime. He also has experience of the supernatural as he portrayed Watanuki in xxxHOLiC, a dorama I am watching.

The story begins with the human race on the brink of extinction brought on by a sudden attack from wave upon wave of man-eating giants. These giants appear to be mindless and don’t devour humans as a food source but because they enjoy it. Mankind only survived because it sealed itself in a city with 50 metre-high walls which were taller than the biggest of giants. 100 years later and people live in peace in this city. A teenage boy named Eren and his foster sister Mikasa then witness a new, even larger giant who appears out of nowhere and destroys the wall allowing smaller giants into the city. After witnessing his mother being eaten alive Eren vows to take revenge on these giants for all of mankind and murder them all.

This is Hajime Isayama’s award-winning manga Attack on Titan (Shingeki no Kyojin) and I am bloody scared to read on with that title because the art work and story are gruelling and because of the focus on the horror inflicted on human lives. It is one of the toughest manga I have read. I love the works of Tsutomu Nihei (Biomega, Abara) and read those for fun but because they are cool sci-fi stories (really cool actually… painfully cool) but this is a whole other level of misery because unlike the last two titles, this has brutal existential leanings as this Wikipedia entry on its themes reveal:

The Author notes on idea of walls and complacency in human society as opposed to independent spirit and freedom of the main character. The story also runs with the idea that the world is a naturally cruel environment where the strong survive and the weak need to fight for their place.

The staff behind it gives one cause for hope as it is directed by Tetsuro Araki, the chap 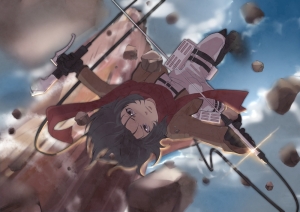 who helmed Guilty Crown and Death Note. He also directed Highschool of the Dead but I will forgive him for that since it was the source manga’s fault for it being so bad. The series composition is handled by Yasuko Kobayashi who wrote the scripts for Genshiken and Jojo’s Bizarre Adventure.

The voice actors are led by Yuki Kaji as Eren who was mysterious and insane as the Novelist in Un-Go and jovial and vaguely menacing as Judeau in the Berserk movie. Yui Ishikawa, a relatively new voice actress takes the role of Mikasa.

First Impression of Attack on Titan 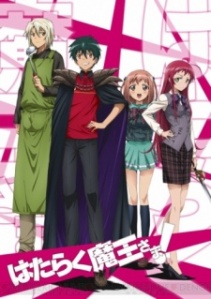 In another dimension the Devil King Sadao is close to conquering the world when he is beaten by Hero Emilia and forced into another world… which just happens to be modern-day Tokyo. His Devil King skillset pretty much revolves around “Conquering the World” which is mostly useless in his new situation an so he is forced to work as a freeter to pay the rent!

I’ll admit that I like the story. It can run out of steam very quickly but I am not bothered by repetitive comedy – I watched Kill Me Baby to the end! It is directed Naoto Hosoda who worked on Mirai Nikki. Masahiro Yokotani who will have the task of sustaining the humour beyond the premise. Yokotani has written for a variety of titles like K-ON!, Steins;Gate (my second favourite anime of 2011 and quite complex),  Nodame Cantabile and Robotics;Notes.

The villainous Devil King is voiced by Ryota Ohsaka (Yuki in tsuritama). Heroine Emilia is voiced by Yōko Hikasa who is amusing as Gabriella in Cuticle Detective Inaba and will be heard in the forthcoming sci-fi anime film Hal. She was also Satan in Umineko: When They Cry – pretty hardcore! 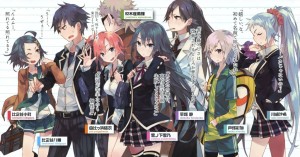 My Youth Romantic Comedy is Wrong as I Expected

Hikigaya Hachiman is a pretty antisocial high school student with no friends or girlfriend and a very cynical view on life. When he is asked about his future dreams, he responds, “Not working.” A teacher then gets Hachiman to join the volunteer “service club” which is where the school’s prettiest girl, Yukino Yukinoshita, spends her time.

My Youth Romantic Comedy is Wrong as I Expected looks like it could genuinely be amusing and the few bits I have read of the manga have amused me. I like the title. Is this Haganai but with the male character being the mean one? I’ll bite! As much as I hate school stories I always end up watching at least one and sometimes I like them like in the case of Haganai and other times I get bored by them and feel too old like in Mysterious Girlfriend X.

The director is Ai Yoshimura who was an episode director for the school comedy Oreimo. Series script supervisor is Shotaro Suga (Ghost in the Shell: Stand Alone Complex, Blood+ and Eden of the East. The character designer is Yuu Shindou who provided the character designs on Mawaru Penguindrum, my anime of 2011 and the source of some of the pictures on my walls… ahem…

The voice actors are Takuya Eguchi (Satoshi in Eden of the East) voicing Hachiman, and Saori Hayami (Miho in Bakuman) voicing Yukino. The stand out name is Marina Inoue who wasthe voice of Yozora in Haganai. She was also Rei in Highschool of the Dead and one of the few decent things in that horror show.

¹ The UK release for the DS and 3DS version of Devil Survivor 2 Overclocked is in April and I will hopefully get one of them at some point.