This week was spent catching up with reviews of some of the films I saw at the Japan Foundation’s Touring Film Programme. I gave a 4 to Ninja Kids!!!, a great little kids films by Takashi Miike while I gave a perfect 5 to Mai Mai Miracle which, despite initial scepticism, won me over. The more I thought about it the more I loved it. I also posted a trailer for the dorama xxxHOLiC. Film-wise I watched the Edward Norton film The Painted Veil and found that I loved it. I also watched the great little crime thriller Heat After Dark – an Austrian DVD but with English subtitles thankfully (always check before you order!) – and I watched more of Robotics;Notes and Arch-enemy and Hero. I have also been ploughing through Resident Evil 6! Tonight I watch The Twilight Samurai directed by Yoji Yamada who has a film in the Japanese chart and at the Berlin Film Festival called Tokyo Family…

What does the Japanese film box-office chart look like this week (Feb 9th/10th)?

Last week’s release, Brain Man takes second place while older films switch positions by dropping down a place. There aren’t too many interesting films there and I can’t see this week’s releases having much of  major impact…

What Japanese films are released this week? 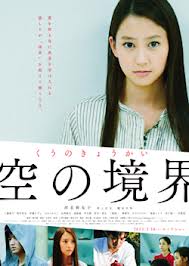 Kei Horie is a bit of a journeyman director and actor who has been involved in low-budget v-cinema shockers like Shibuya Kaidan 1 and 2 and The Suicide Manual (shocking because they are terribly dull). He has come a long way since then with great dramas added to his name such as Sentimental Yasuko and Tomorrow, both released last year. This is another drama although it is based on a real-life incident. It is packed full of love and suspense and diving!

Yuko (Kawakita) works as a clerk in a prefectural swimming pool. She was once a high diver with a promising future but cannot do it anymore due to a traumatic incident that occurred in the past. She cannot even contemplate marrying her lover Satoshi (Makita) and so she decides to get counselling.