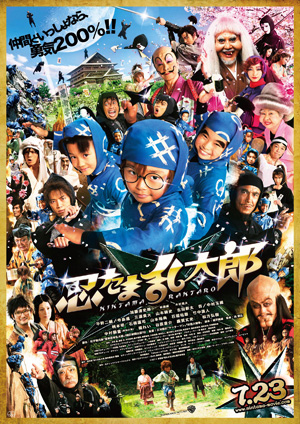 Ninja Kids!!! was the second film that I saw at the Japan Foundation’s Touring Film Festival 2013 and there was an audience made up equally of adults and kids. I felt everybody was engaged and laughed at all the comedic moments and even sniffed at the more emotional ones thanks to its good natured handling by director Takashi Miike.

Ninja Kids takes place in 16th Century Japan during the Sengoku period. We first see Rantaro (Kato) at home with his parents in a farm house. He is from a low-class ninja family. Things will change because Rantaro, upon his father’s recommendation, is heading to the ninja academy to train to be an elite ninja and raise his family in terms of status. “I’ll do my best” he cries before setting off.

The academy is somewhere deep in the mountains of the Kansai region. His journey is long and we see him running through blossoming cherry trees, a town and a forest and even in between a samurai battle but he eventually makes it to the academy which is a spectacular and colourful vision of fun packed with eager, fresh-faced children and CGI ninja shimmying up and down ropes and other obstacles that look like a lot of fun.

And this is how most of the film continues. Rantaro makes a lot of friends like Shinbe (Kimura), the son of a wealthy merchant family who has a nose that constantly runs and a case of narcolepsy, and Kirimaru (Hayashi), an orphan who lost his parents in the war who now has a job babysitting to pay his way.

Indeed we get to meet nearly all of the students as we see their training like throwing grenades, fighting, evasion and deception through disguise and all sorts of ninja gadgets but these kids will soon prove their worth when assassins from the Usetake clan target a fellow student named Takamura (Mizoguchi) who want to kill his father Yukitaka (Kaga) for leaving their clan to become a hair stylist.

A hair stylist? Yes. What makes ninja kids a comedy is the sheer absurdity of the situations.