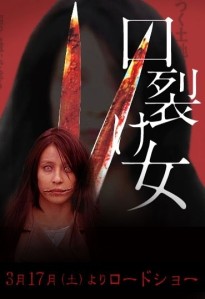 Thirty years ago, the streets of a suburban town named Midoriyama were terrorised by a beautiful woman. She was tall and had long hair. Her mouth was covered with a mask. She would roam the streets and ask people, “Am I pretty?” She would then reveal her mouth which was slit up to her ears. Her jealous husband had disfigured her face. She would then take people to her hideout and slit their mouths in a similar fashion. Everybody knows this urban legend. When a young boy disappears his friends claim that the slit-mouthed woman is back in town. Kyoko Yamashita (Sato) is a new teacher starting at the school the boy attended. She, like the authorities, is concerned and takes measures to protect the children. When one child she escorts home, Mika (Kuwana), disappears she sees the slit-mouthed woman first-hand. A fellow teacher named Noburo Matsuzaki (Kato) seems to know something about what is going on and he is determined to stop it with Kyoko helping. 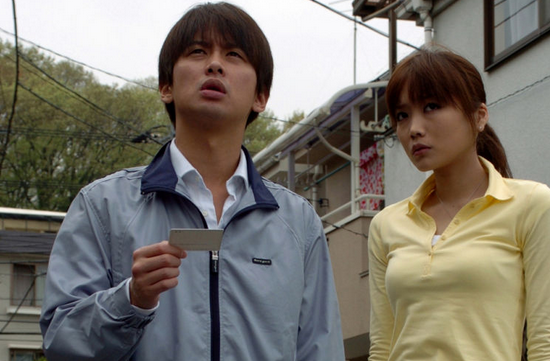 There are a few different versions of this story. The oldest version dates back to the Heian period (794 – 1185) which describes how a samurai slit the mouth of an unfaithful wife/concubine and asked her “Who will think you’re beautiful now?” The scarred woman would then wander streets her mouth covered with her kimono and ask people, “Do you think I am pretty?”

If a person answered she would lower her sleeve and reveal her ghastly visage and ask, “Do you think I am pretty now?”

Whatever the answer she would then mete out a fate similar to the one she suffered. The legend has persisted in Japan and turned into a popular urban folk-tale, altering and updating every time it is retold and adding new touches like her facial disfigurement is the result of plastic surgery gone wrong. She also wears surgical masks which are used to stop the spreading of common colds serving a double purpose as they can also hide the grotesque disfigurement. There are usually twists added such as ways to outwit the ghoul which involves giving her a lollipop.

The story of the slit-mouthed woman is perfect fodder for a slasher film and Shiraishi picks up on this as he attempts to update it for a modern audience. His method? Mixing the tale with the theme of child abuse. 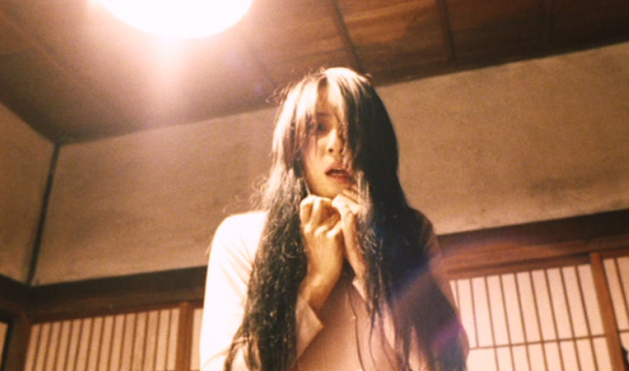 The film establishes the timeless nature of this urban legend at the start in what turns out to be the best part of the film. A creeping camera floats through school corridors, streets and homes as a myriad of people are discussing variations of the legend, the camera slowly zooming in on rapt faces as parents and children regale each other with their takes. There is an amusing conversation where a father listening to his daughter’s take on the legend says, “Eh? The slit-mouthed woman has become merciless these days.” Merciless is quite the word because when the slit-mouthed woman does start snatching people we witness her perform shock attacks, her entrances always a surprise. She corners people and mutilates them with a huge and rusty pair of scissors. If you are squeamish then this will be effective.

A killing will start on a close-up of the scissors hovering close to the face before it cuts away to a shot of the terrified eyes of the victim or the back of the ghoul but this does little to lessen the horror because the sound effects are gross. Few believe the kids who warn about the presence of the ghoul and put it down to over-active imaginations mixing uneasily with the urban legend.

What is surprising is that nobody is safe in this film. Even children are under threat. It fits in with the theme of parental abuse running laced in the plot. Some of the characters are shown suffering child abuse or inflicting it. Mika is a victim of her mother’s attacks while some of the adults have dark histories of her own. This is subject matter which is not unfamiliar to J-horror and it can either add a human element or it can be mishandled and contrived. The constant use of images of abuse might have given the film some backbone and transformed this from being a simple slasher film but it never amounts to anything because the situations and characters are under-developed and the resolutions are really dealt with in a trite manner. Worse is the fact that it plays a part in a very contrived origin story for the titular character and it makes the whole plot convoluted, nay, a fragmented mess that sluggishly lumbers along burdened by the need to be mysterious.

What of the woman at the centre of this all? As a presence she initially has impact with her dirty raincoat and straggly hair and when she pulls off her surgical mask she is a creepy figure thanks to the slit mouth and wild staring eyes. The make-up for the fabled mouth is pretty good as it is detailed with ragged flaps of skin and a view of her entire lower jaw. Unfortunately she is wasted in the final few sequences where fights which seemed to go on for longer than necessary and she has no physical viciousness or much presence. I felt the tension bleeding out with every moment. The film works best when it is subtler, the slit-mouthed woman closer to a liminal presence appearing and disappearing at random, her back-story a mystery still to be explained.

As for the actors none really stood out. Their characters are under-developed and there are more than a few wooden performances not helped by the staginess of some of the dramatic scenes. Overall, the film starts out as a decent take on the urban legend but becomes mired in adding new twists and elements which results in the film being dull. The slit-mouthed woman is also wasted as a villain which is a shame. Still, there are two more sequels.