This week I had a break from work and spent time doing… well I had hoped to do lots of writing but I ended up playing the last three episodes of The Walking Dead. I was almost in tears at the end. The journey that I embarked on with Clementine came to a fitting conclusion and I can confidently say it is my game of the year. As far as movies go… I watched Skyfall at a cinema and loved it (review tomorrow), Berserk Golden Age Arc I: Egg of the King and a lot of other films at home. As far as movies and this blog go… I started off with two trailers for forthcoming anime movies: Steins;Gate and Aura and I posted my review of For Love’s Sake, the final film I saw at the 56th BFI London Film Festival.

What does the Japanese movie chart look like this week?

The latest Eva movie is killing everything out there. At $35 million in just two weeks, it looks set to be one of the biggest box-office hits of the year. Crow’s Thumb, which was released last week, is the only new Japanese film to enter the chart. For its third week, Takashi Miike’s Lesson of the Evil stays in second place. No surprise in the absence of Milocrorze.

What Japanese film is released today? A lot of small ones in an example of counter programming because Skyfall is released this weekend and I suspect distributors are scared to go up against it with anything major. That said, the latest Inazuma Eleven anime movie is released and suspect that will do well. Here’s the trailer for Skyfall and Inazuma Eleven.

I saw this film earlier in the week and I loved it! Expect a review tomorrow!

Istanbul, James Bond (Craig) is on assignment with fellow field agent Eve (Harris) tracking down a computer hard drive which contains the identity of almost every NATO agent embedded in terrorist cells around the globe. Things go wrong when Bond is wounded and falls into a river leaving M (Dench), back in London, with an agent down and major security headache all while she is being pressured into retirement by the Parliamentary security committee chairman Gareth Mallory (Fiennes). Then MI6 headquarters is attacked during a cyber-terrorist assault on British Intelligence. With events spiralling out of M’s control Bond comes back, joining forces with the new Q (Whishaw), to track down the person behind the attack, first heading to Shanghai then to Macau where he meets Severin (Marlohe), a woman who knows about the plot and how it is linked to a man named Raoul Silva (Bardem). 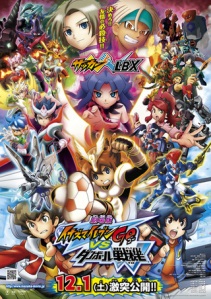 Inazuma Eleven is a popular franchise that merges spectacular powers and the sport of football. In this movie the team fight a terrorist organisation who launch a robot invasion. Ah Japan, so imaginative.