This week will be memorable for me forever because I attended my first ever major film event in the shape of the BFI London Film Festival where I saw some God-tier films although things got dicey on my final day because I had to run part of the way to the BFI because I took a wrong turn at Horse Guards Parade (I got there just before the film started). Thankfully I had such a great time that my Olympic marathon could not dent my enthusiasm and the film I saw was, as I mentioned earlier, God-tier. Meanwhile, back at the ranch… the blog kept going because I posted information about Third Window Films and their forthcoming releases of the double set for Tetsuo: The Iron Man and Tetsuo II: Body Hammer, and Kotoko, which came out on Monday and Isn’t Anyone Alive? which comes out on the 22nd. I also posted a trailer for Park Chan-Wook’s English language debut film Stoker and a little piece about my trip to London for the 56th BFI London Film Festival.

What are the new entries in the Japanese movie box-office this week?

All of last week’s releases are in the charts…? Really? Even The Mystical Law? Well Outrage Beyond is at the top spot, Tsunagu takes third, The Mystical Law takes fifth and I Have to Buy New Shoes is at nine despite the negative criticism from Alua and Goregirl 😉

What are the Japanese films getting a release today? 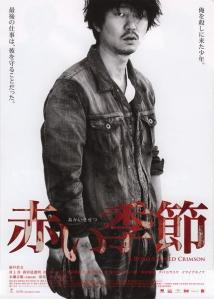 Ken (Arai) was once a contract killer but has turned his back on violence and spends his time working in a motorcycle shop with his mother Yoko (Fubuki). The one thing that eats away at him is the identity of the man who killed his detective father. Until Akira (Murakami), another contract killer, shows up at the shop and tries to lure Ken back into the killing life. With Akira and the mystery surrounding his father playing on his mind, Ken is faced with destroying the peaceful life he has established with Yoko.

The End of Puberty

Shoko Kimura makes her directorial debut in a comedy that was seen at this year’s Berlin Film Festival. It sounds like an absolutely twisted story seen in the anime world but reviews plug it as something more considered. It stars. Miwako Wagatsuma (Sentimental Yasuko, Guilty of Romance), Aimi Satsukawa (Demon’s Elevator) and rising star Shota Sometani (Himizu, Isn’t Anyone Alive?, The Wolf Children Rain and Snow). I love the chip-tune music!

Madoka (Saito) is a biology teacher with no backbone. Therefore, he cannot control his class who misbehave. Tsubara (Wagatsuma) is the only person who takes any notice of him. She’s not interested in lessons as she is more interested in Madoka himself because she’s in love with him. Tsubara is quite a strange person herself as she only eats things with preservatives so that her body will not rot after death and she and be remembered. She also likes to draw manga of Madoka and herself having sex but with sexual organs reversed. When the two do have a real life encounter and their sexual organs are switched, they flee to the countryside. Tsubara’s best friend En (Satsukawa) and her amorous boyfriend Maru (Sometani) track them down and they have some erotic energy of their own that they want to work out.

Popular NTV show Shiritsu Bakaleya Koko gets the big screen treatment. It features a whole gamut of (ridiculously named) young idols from groups managed by Johnny’s Jr and teams from AKB48 (Haruka Shimazaki, Mina Oba). Just looking at the cast list, poster and the trailer I know I should be packing up my stuff and heading for the hills because this is not aimed at me. Actually parts of it look like a cheap and unmemorable Ai to Makoto.

In 1974 Leiji Matsumoto (Galaxy Express 999, Captain Harlock) and Yoshinubu Mishizaki created Space Battleship Yamato which became a massive hit. Thirty-eight years later we see  the latest part of the anime movie adaptation released. The role of director is taken up by two men: Yutaka Izubuchi is a veteran designer in the anime industry having worked on anime like RahXephon and the brilliant anime Patlabor. He joined by Akihiro Enomoto who has worked on Fafner, Mobile Suit Gundam 00. Nobuteru Yuki (Escaflowne) acting as character designer and animation director.

There are a lot of veteran seiyuu involved with Daisuke Ono (Shizuo Heiwajima in Durarara!!), Kenichi Suzumura (Uta no Prince Sama), Aya Hisakawa (Yoko Yuzuki in Mōryō no Hako), Rina Satou (Mikoto Misaka (A Certain Magical Index), and Rie Tanaka (Sammy in Time of Eve). The animation is produced by Xebec (Nyarko-san: Another Crawling Chaos) and AIC (Burn Up).

In the year 2199, the human race has lost a war against alien invaders named Gamilos and have been driven underground due to the threat of radiation. Scientists give humanity a year before it is destroyed. When young officers Susumu Kodai and Daisuke Shima retrieve a capsule from a ship that crash landed on Mars they set off to Iscandar on the other side of the Magellan Galaxy which has the technology to smash the Gamilos and save Earth. The battleship Yamato is sent on a mission to get that technology.

Following on from last week’s release of the first Madoka Magica movie, this is the second and it covers the last four episodes of the television series. The animation in the trailers and the look of the posters are incredible but I still cannot bring myself to watch the film. Cast and staff remain largely unchanged but it looks like the one character I might have rooted for didn’t make it…

Madoka Kanome (Yuuki) is a normal school girl with a caring family and good friends like Sayaka (Kitamura). She leads a calm life until she meets a new transfer student named Homura Akemi (Saito). What changes? She sees Homura attack a creature. When Madoka tries to stop Homura she finds herself transported to a strange world where scary creatures exist and it is only with the help of a girl called Mami Tomoe (Mizuhashi) that she manages to escape. She soon finds herself in a world of magic but soon finds it can be very deadly.