I did not watch too many films… I am watching the anime Le Chevalier D’Eon andI also have plans for a season dedicated to a Japanese director (more on that next week)… Indeed, the only Japanese film activity I have taken done this week is furiously posting about the Japanese Films at the 37th Toronto International Film Festival, and furiously planning my trip to the BFI London Film Festival (post tomorrow – here is Alua’s post about the event at Otherwhere). I also posted about the cool anime Kyousogiga and Annoying Dragon interrogating me. Blogging style. It was fun! Enough about me.

What is happening with the Japanese movie box office?

Akko-chan the movie, one of the Japanese films released last week enters the chart at number five. Rurouni Kenshin remains at the top spot. Indeed, the top three remain unchanged from last week. Umizaru and The Wolf Children are still raking in cash while another new entry, the French film Intouchables enters just above them.

There is an interesting selection of Japanese films released today.

This latest entry in the Bayside Shakedown series was released yesterday. This is a popular franchise running since the 90’s – when I first visited Asia movie sites like Kung Fu Cult Cinema back in the early 2000’s, this was a familiar title. This latest one is apparently the final entry in the franchise and it stars Yuji Oda who has been in numerous entries franchise, Eri Fukatsu (Villain, Space Travellers), Yusuke Santamaria (Doppelganger), and Shun Oguri (Ghost Train, Space Brothers). The trailer looks like fun.

Shunsaku Aoshima (Oda) and the team have to unravel a case of kidnap/murder which takes place an International Environmental Summit which may involve a member of the police organisation.

This film is an adaptation of Hiroshi Tanaka’s manga. It stars a whole bunch of popular actors who I keep writing about including Kento Hayashi (Ushijima the Loan Shark), Sadao Abe (Paikaji Nankai Sakusen, Maiko haaaan!!!, After Life), Tetsuji Tamayama (Who’s Camus Anyway?, Elevator to the Gallows, Norwegian Wood), Hirofumi Arai (A Road Stained Crimson), Arata (The Millennial Rapture) and Jun Murakami (Himizu, The Land of Hope). I really need to review After Life and Who’s Camus Anyway?

Tetsu Hino (Tokui) once led a teenage motorcycle gang which struck fear in the Kanto area. He is now a father struggling to provide for his family including his teenage son Shuhei (Hayashi) who is now following a rebellious path. When Tetsu is contacted by his old biker gang it is because the daughter of one of them was assaulted by an old rival named Igarashi (Murakami). Tetsu finds himself drawn back into his old life-style. 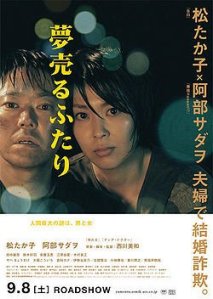 When Kanya (Abe) and Satoko (Matsu) celebrate the fifth anniversary of their restaurant they had no idea it would end with the place burning down. This disaster forces Satoko to take on a job at a noodle shop while Kanya gets depressed and does what most movie men do in such a situation: drink and gamble. Then, one night, he returns home with cash and claims he got it by spending time with a lonely woman.  Satoko is initially angry but then realises the full potential of the scame and so the two embark on a series of sham relationships to get money together to re-open their restaurant. Surely it wont go that smoothly?

Unfortunately before I posted this my computer suffered a major software fault. Right now I am running on a slightly older back-up which means I have had to do a bit of tinkering to restore settings/programs. I was able to retrieve my files and get things back up and running but this does not leave me feeling terribly confident. I am going to have to get a new computer and another portable hard drive. If I go dark for a spell, you know why. Fingers crossed, this is just a hiccup.