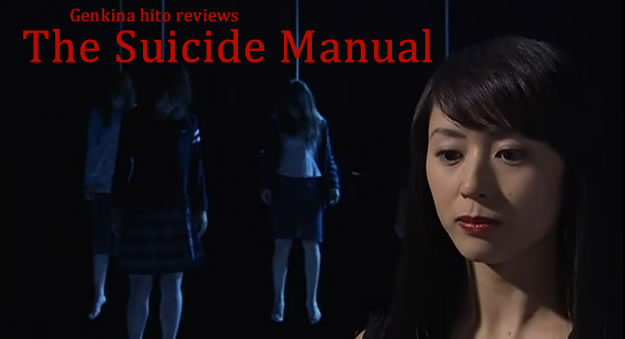 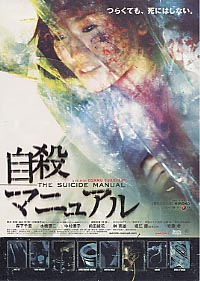 Wataru Tsurumi’s notorious book, The Complete Manual of Suicide has been blame

d for helping people to commit suicide and improving the chances of death occurring. This is not the first time I have encountered Wataru Tsurumi since news organisations around the world carried reports on his work. What I did not know was that his book had inspired a film. The result is far less interesting than one might think.

Yuu (Mizuhashi) is a journalist/cameraman with AX TV, a local broadcaster. He has been tasked with investigating a recent spate of suicides by his boss Yashiro (Sakaki). He heads over to the scene of a group suicide with his assistant Rie (Morishita) where they encounter a survivor (Nagasawa) who puts them on the trail of a woman named Rikki (Nakamura) who organises group suicides through her suicide bulletin board and a DVD she sends to potential suicides. The DVD is called The Suicide Manual. Yuu finds himself haunted by the concept of suicide and becomes obsessed with contacting Rikki.

This V-cinema release was the second directorial effort of Osamu Fukutani, one of the writers from the low-budget horror films The Locker 1 and 2. The cast list for The Suicide Manual features actors from both of those films and even the director Kei Horie. While I was no fan of Osamu Fukutani’s writing in The Locker I am interested in seeing how he squares up as a director.

The film opens with the lines:

The purpose of this movie is to warn against suicide. Its intent is not to encourage people to commit suicide

At no point did the film glamorise suicide. It approaches it in a restrained manner, seemingly interested in examining causes of suicide and how The Suicide Manual might help. And then goes completely off the rails and crashes into the buffers of silliness by adding supernatural elements.

The film starts strong with a rather startling opening with ghastly electronic music playing over scenes of a group suicide, people lying in a room with doors and windows taped up, a charcoal burner in the centre and drinking water and pills scattered around. There is nothing edifying about such a sight. A detective (Horie) goes as far as to say “People think carbon monoxide poisoning is a clean and easy way to die. It’s not.” Then, as is characteristic with the film, it backs away from offering any thorough probing of suicide.

We are then introduced to our protagonist and one of his antagonists. Yuu is making a 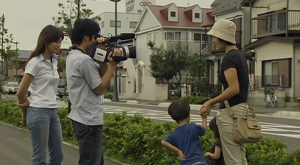 documentary on the psychology of youth suicides and how it is developing as a trend. His boss Yashiro, in a typical example of media exploitation, wants something sensationalist – deaths on tape and so forth. This is a great set-up because it takes in the effects that technology and social media like the effects online suicide bulletin boards have on people’s psychology. The characters are initially interesting. Yuu, as played by Mizuhashi, is rather affectless and suffering from a serious case of ennui which hints at inner-turmoil. Yashiro is charismatic, a bully, and crass. His bullying forces Yuu to confront the suicide manual which we see in lurid detail.

The Suicide Manual itself is the spooky highlight of this film. We see atmospheric clips of Rikki narrating from the Manual itself as suicides happen. Filmed against a black 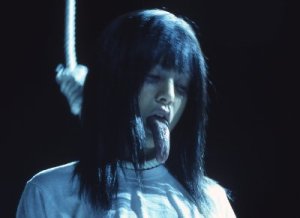 background which focusses the viewer’s attention on the events and adds a sense of cosmic dread we follow various methods of suicides, pills and poison, moving vehicles, jumping, hanging, and the privacy of woods. The film is at its strongest during these moments when it parcels out advice on how to end life. For people of a sensitive nature it is depressing stuff.  If Rikki is repeating lines from the book verbatim then it is hard to believe it would inspire suicide but easy to see how it can inform people of the best ways they can take their lives.

What does the film do with such a great opening? It throws it away in favour of a poorly thought out supernatural psychological melt-down. The writing here felt far more restrained and detailed than the Locker films but it loses its way towards the end.

I gradually became frustrated with the characters. Yashiro remains the same throughout the film, never really challenged to change as a character. Yuu’s inner-struggle overwhelms him and so he becomes paralysed too soon, the mysterious plot hobbled by a protagonist who becomes useless. In a film meant to explore suicide our journalist character decides he would rather find a corner to crouch in and look angsty. He’s not much of a journalist. When he chances upon characters integral to his investigation who say interesting things he isn’t filming. When Rie questions him about his journalistic methods he says things like “there will be other chances.” Really? Last time I checked suicide is a one way ticket and those interviewees won’t be coming back. Yuu remains a rather affectless and miserable wretch of a character and his arc inspires neither sympathy nor empathy and as the plot headed towards its nonsensical nonlinear supernatural ending I had lost interest. 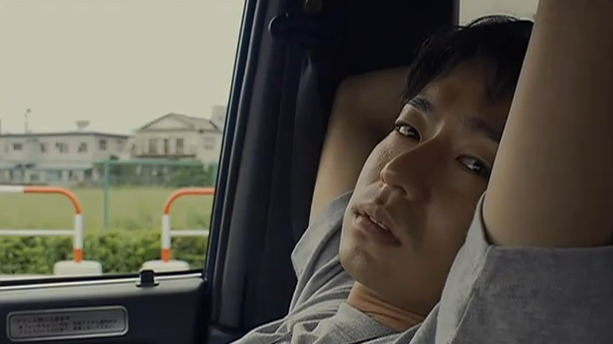 Indeed the film fails to build much atmosphere thanks to its conventional direction and low-budget feel as is seen in the sets. That is not to say that the direction is bad, merely adequate much like the acting. The film flows easily from one moment to the next and there are no shots that feel out of place. Mizuhashi convinces in his portrayal of depression and self-pity but the script offers little serious analysis of suicide and its co-opting of the supernatural undermines proceedings. I get the feeling that given a better script and bigger budget Osamu Fukutani might turn in something good. Unfortunately any attempts to seriously discuss suicide are shuffled off to the side in favour of an inconsistent plot involving suicide spirits. This stands in complete contrast to Suicide Circle which had a narrative that bombarded viewers with ideas and scenes that were thought provoking, compelling characters that were well written and acted, and an unpredictable plot that kept viewers on their toes.