A Blu-Ray re-release of Love Exposure had to happen. At four hours the film has to be split up on to two discs when it is transferred onto DVD which means breaking the magic of a viewing experience by getting up and changing discs. Love Exposure is now on Blu-Ray (its release coincides with the DVD/Blu-ray release of Sion Sono’s newest film Himizu). You can hear what Goregirl and I thought about the film in our next Sono podcast next week. By the way, four hours was not the total running time of the film and a lot of it was cut but thanks to the storage capacity of Blu-Ray you get all of that cut footage amidst an awesome set of extras.

Here are the details! 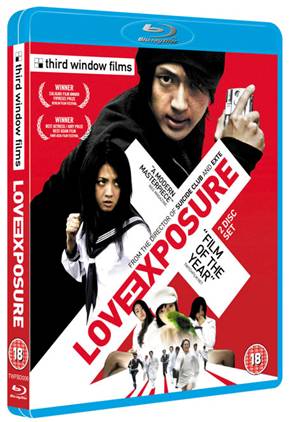 One of the most talked-about Japanese cult films of the last decade finally makes its way onto blu-ray featuring a new high definition transfer supervised by director Sion Sono along with brand new extra features!

Yu (Nishijima) lives the life of a devout Christian. After his mother dies his father Tetsu (Watabe) becomes a priest but is soon seduced by an emotionally volatile woman named Kaori (Watanabe) who then proceeds to leave him. A heart-broken Tetsu begins to torment the spiritually and morally innocent Yu by forcing him to confess sins on a daily basis.  To appease his father Yu begins to sin and on the advice of delinquent friends he trains to become an expert in up-skirt photography and becomes a master at getting panty shots. One day, while dressed as a woman, he witnesses a beautiful man-hating girl named Yoko (Mitsushima) get into a street brawl. He instantly falls in love with her and decides to intervene. Little does he know that a cult leader in the Zero Church named Aya (Ando) is manipulating them for her own purposes.