This week I posted a review for the South Korean horror movie Bedevilled, a trailer for Ushijima the Loan Shark and a review of the French film Irma Vep. Irma Vep had been on my movie wish list for a long time and now it has left that and entered my favourite movies of all time.

What’s does the Japanese movie box-office chart look like this week?

The top 15 of the Japanese movie box-office charts this week are saturated with last week’s releases. Drudgery Train entered at thirteen, Nanoha at five, Helter Skelter at four, the latest Pokemon movie enters at two and Uzimaru 4 storms to the top. Gusko Budori falls out of the top ten in its second week and Thermae Romae still (still!) sticks in the top ten and has achieved $72, 844,388. It boggles my mind how a manga with such a strange premise could achieve so much. I’m assuming it’s a combination of Hiroshi Abe’s great looks and great comedy.

What Japanese films are released today?

What Japanese films are released today?  Last week was very busy with new releases while this week is quiet with The Wolf Children Ame and Yuki being the only major release. It will be interesting to see where this stands next week.

The Wolf Children Ame and Yuki 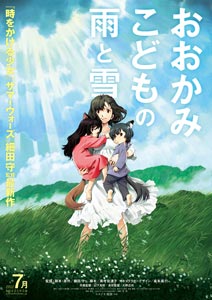 Mamoru Hosoda is frequently called the next “Hayao Miyazaki” but despite similar styles of magical realism and the use of similar themes there is a certain restraint in the fantastical elements that Hayao revels in. My enthusiasm for Hosoda’s work is tempered by the fact that I loved The Girl who Leapt Through Time but was left unimpressed by Summer Wars (which everyone considers his best). As far as this film goes Hosoda is aided with scripting duties by Satoko Okudera who has worked on major anime movies like Summer Wars, Miyori’s Forest, The Girl Who Leapt Through Time, and The Princess and the Pilot. Legendary character designer Yoshiyuki Sadamoto (Nadia: The Secret of Blue Water, FLCL, Evangelion) is acting as character designer here. Madhouse Studio (Paranoia Agent, Black Lagoon, Millennium Actress, Perfect Blue, Master Keaon, Dennō Coil) is co-producing the animation.

A story of love between parents and children that takes place over thirteen starts when a university student named Hana falls in love with Ōkami who is a “wolf man”. The two marry and have children named after the weather on the day they were born – Yuki (snow) the older sister and Ame (rain) the younger brother. The four live quietly in a city concealing the true existence of their relationship until Ōkami dies and Hana decides to move to the country.

The voice actors involved come from the world of live action movies. Hana is voiced by the actress Aoi Miyazaki who starred in Shinji Aoyama’s 2000 film Eureka (she does have experience in anime after voicing Tula in Origin: Spirits of the Past). Ōkami is voiced by Takao Osawa (All About Lily Chou-Chou), Yuki is voiced by Haru Kuroki, and Ame is voiced by Yukito Nishii (Confessions). Other notable names include Momoka Oona (Mitsuko Delivers) who plays an even younger version of Yuki, Amon Kabe(Tada’s Do-it-All House) who plays an even younger version of Ame, Shota Sometani (Himizu, Sadako 3D, Isn’t Anyone live?), Mitsuki Tanimura (13 Assassins), and Kumiko Aso (Pulse).