Third Window Films are all set to release Himizu on DVD and Blu-Ray on the 6th of August. Himizu has to be one of the best films of 2012. As my review shows I found it emotionally powerful, visually stunning, and full of compelling performances. Even if I was not a hard core Sono fan (two seasons of his films and a third planned, two podcasts) I would still consider this an excellent film.

Anyway, I received information on the DVD/Blu-Ray release and as usual Third Window Films are delivering the film in a stylish case and it is packed full of excellent extras!

Here are the details.

Junior high school kid Yuichi Sumida (Shota Sometani) wants a quiet life but his mother (Yukiko Watanabe) comes home with different men every night, and his drunken, hate-filled father (Ken Mitsuishi) only pays him visits when he needs money. Yuichi carries on running the family boat rental business and lives surrounded by homeless people who are victims of the tsunami. Meanwhile at school he is ignoring class-mate Keiko Chazawa(Fumi Nikaidō) who has a massive crush on him. Things get tough when his mother abandons him and Kaneko (Denden), a Yakuza loan-shark, shows up looking for Yuichi’s father and ¥6 million. Pushed to breaking point by his situation Yuichi finds himself unable to control his anger and a series of events leads him to the brink of madness.

One of the most talked about Japanese films of 2012, ‘Himizu’ is Sion Sono’s biggest box-office success to date. 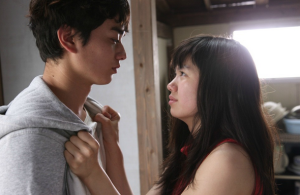 After Shota Sometani & Fumi Nikaido won the Marcello Mastroianni Award (they became the first Japanese actors to win the prestigious award) at the 68th Venice Film Festival, Himizu opened in Japanese cinemas on January 14th pulling in an astonishing 27,000 admissions over 79 screens in the first 2 days, with a per-screen average beating the big budget war film ‘My Way’ which opened the same weekend.

On March 11th, 2011, the largest earthquake in recorded history struck the coast off Japan, sending a massive tsunami causing a wave of destruction that decimated large parts of Japan’s Eastern seaboard and causing the nuclear reactors at the Fukushima Power Station to explode.

This tragedy affected everyone in Japan, especially director Sion Sono who had just finished adapting the hugely popular Manga ‘Himizu’ into a screenplay. Director Sono immediately put the project on hold to help with the volunteer effort in Fukushima and during his work decided to change the setting of ‘Himizu’ story to Fukushima and film it there in order to show the world what happened.

Sion Sono’s next work ‘The Land of Hope’ will once again focus on the aftermath of March 11th, but will this time look at the nuclear situation which has become much lot worse than most people are aware of.