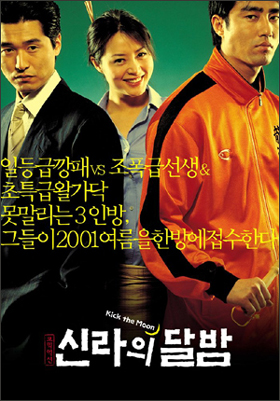 Kick the Moon is such an intriguing title and it must have meaning for South Korean’s but it’s lost in translation. In any case this is a very entertaining gangster comedy.

Ten years ago a legendary fight took place between two rival schools in Gyeongju. Tough guy Choi Gi-dong marks his place in history by getting into the thick of the brawl while his friend, the shy and decent student Park Young-joon stays out of trouble which makes

him a target for bullying for his fellow students. Ten years later the two have switched roles as Choi Gi-dong (Cha Seung-won) is a high school home-room teacher desperate to keep his kids out of trouble while Park Young-joon (Lee Sung-jae) is a major gangster operating out of Seoul. When Park Young-joon is sent to annex criminal operations (quite openly) in Geongju for his gang he runs into Choi Gi-dong and what starts off as a friendly reunion becomes testy when they reminisce about the fight. Their relationship sours even

more when they both meet and fall for feisty and cute café owner Min Ju-ran (Kim Hye-su) who has a school-age brother, Min Jin-seob (Lee Jong-su), desperate to be a gangster. The two will find their friendship strained as they fight over Min Ju-ran amidst the chaos of a mob war.

South Korea has a habit of producing amusing comedy films mixing crime with normal situations. My Wife is a Gangster had a crime boss marry a regular guy. My Boss, My Hero which had a gangster go back to school. Attack the Gas Station! had a band of youths do exactly what the title says. The last film was Kim Sang-jin’s directorial job before this film which answers the question, ‘what happens when teen delinquents grow up?’

This line is uttered by home-room teacher Choi Gi-dong after reigniting a childhood friendship with someone who has radically changed from weakling into strong man. It is amusing because Choi Gi-dong is far from being a sissy and is more like a mean P.E. teacher who has taken to bullying his kids in order to prevent them from becoming gangsters but it goes deeper than that and into his insecurity over his old friend’s growing dominance which threatens to usurp him from his alpha male status.  It is hard not to sympathise because Park Young-joon cuts an impressive figure with his good looks, coiffured hair, stylish suits, army of thugs, and fleet of cool cars that chauffeur him around. The possibility that former cool guy Choi Gi-dong’s nerdy friend might beat him in the race for Min Ju-ran’s heart sets in motion a comedic game of one-upmanship as the two switch between their adult and school personas, letting their maturity fall away as they return to old quarrels, and try to embarrass one another with snippets from high school life.

As the film develops it mixes goofy gangsters with jibes at the school-yard histrionics surrounding loyalty to gangs regularly talked of by boys by contrasting the present realities for grown up Choi Gi-dong and Park Young-joon with a new generation of boys who are drunk from stories of the legendary fight and itching to brawl at every opportunity and become gangsters. The kids who espouse tales of loyalty sound ridiculous while the adults who swallowed all that talk before them find it useless in their contemporary lives. It is amusing seeing once beloved friends and bitter enemies rub shoulders and reminisce ruefully over past events.

While the meat of the film is the amusing persona-switching that Choi Gi-dong and Park Young-joon engage in as they relive memories and flit between new social positions there is a mostly forgettable subplot about battling gangsters. It is mostly enjoyable because these one-note characters are more like comic creations, bouncing between taking a beating and belting out karaoke songs and lazing on a beach. That said all this male posturing would be tiresome but in comes Kim Hye-su as Min Ju-ran who adds a vital female comedic spark.

When we first meet her she seems to be a put-upon older sister struggling to keep her brother Min Jin-seob out of trouble but beneath that cute exterior is a manipulative, and aggressive woman (especially when drunk). The rocky bro-mance between Park and Choi is shaken up by her sass and the way she reacts to these larger guys and dominates them leads to some great comic moments, chief among them an awkward dinner where which dissolves into chaos as Min Ju-ran gives a drunken rant over the value of friendship that humbles the two guys. Another personal favourite is an emotional river-side hear-to-heart between Min Ju-ran and Park Young-joon amidst beautiful trees with pink blossoms being undermined by the presence of… I won’t give it away

I was amused to see so many actors from the crime thriller Public Enemy in this and what I wrote back in that review still holds true now, they are just a few facial expressions and physical gestures from comedy. Lee Sung-jae who was so chilling in that film works well in this because he is handsome and reserved and has a supercilious look about him. This time that well maintained veneer doesn’t hide anger but hurt from his school experiences. Contrast that with Cha Seung-won’s rough good looks and exuberant nature and it makes a loveable character you can cheer and great comedy when the old friends clash. Kim Hye-su is the vital third element who brings even more life to events and matches Cha Seung-won’s physical comedy with  distinctive energy of her own.

Where the film falters is in the fighting which has a habit of going on longer than is necessary as if it is searching for a punch line. This almost ruined the ending which dissolved into a massive brawl which lost coherency almost immediately. Overall though, I was greatly amused throughout the film and enjoyed the performances of the three leads, Kim Hye-su, Chan Seung-won, and Lee Sung-jae. That Kim Sang-jin manages to meld the gangster, school, and romance genres into one film and keeps things ticking along nicely is no mean feat. I enjoyed it and even if the fights dragged the film never truly outstayed its welcome because the comedic observations on growing old are rather accurate.

6 thoughts on “Kick the Moon”