I finally got around to reviewing films this week and found that Crime or Punishment?!? and Fine, Totally Fine are charming comedies that combined existential angst, surrealism, and wonderful characters. Himizu was also given its UK theatrical release yesterday and I highly suggest you get yourself to a theatre playing it! Right now I’m reading Murakami’s 1Q84, finishing up Chrono Trigger DS, knee-deep is Lynchian madness with Deadly Premonition and looking forward to doing more reviews.

What does the top of the Japanese movie box-office charts look like?

Two so-so Hollywood comedies are dominating while Thermae Romae refuses to leave the top three even after 5 weeks. The only new film released last week to break into the top ten was Girls for Keeps while the interesting looking and well received film My House failed to make it which is a bit of a shame. 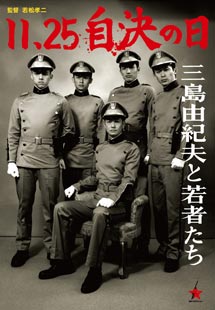 Koji Wakamatsu’s latest film screened at Cannes in the Un Certain Regard category and managed to collect mixed reviews. It is another politically charged movie which tackles the writer, critic, and nationalist Yukio Mishima.

Taking place in 1960’s Japan at a time when economic growth sky-rocketed but the nation was wracked by political turmoil and social changes from sexual liberation to student riots over individual’s rights and the US military presence in Japan, author and intellectual Yukio Mishima was a major voice, a nationalist who espoused traditional values based on the Bushido code while having a controversial private life. He and his militia will attempt a coup d’Etat by taking a military commander hostage.