I ended last week with a review for The Cabin in the Woods and kicked off this week with news about the Japanese films screening at Cannes. Although the selection of films is small it is still interesting. I’ll probably have more to say on the selection next week. I released news on the UK release of Hara Kiri and the forthcoming Japanese theatrical release in Blood-C: The Last Dark.

There’s an alarming abundance of bad Hollywood movies in the top ten but it is pleasing to see A Letter to Momo break into the top ten. What are some of the titles released today? 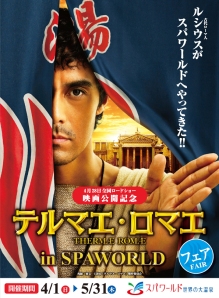 The live-action adaptation of Mari Yamazaki’s manga of the same name has time travel, culture clash comedy. It was partly filmed in Cinecitta in Rome but features Japanese actors who don’t look too Japanese playing principal Romans characters. This looks like a lot of fun and the recent anime wasn’t too bad. I’m also a fan of Hiroshi Abe so I’d definitely like to give this a go.

Roman bath house architect Lucius (Hiroshi Abe) is a perfectionist and traditionalist who gets fired from his architectural practice. In order to cheer him up, a friend takes him to a bathhouse but Lucius slips through a time portal and ends up in modern day Japan. Although initially bewildered Lucius takes inspiration from modern day Japanese baths and implements the designs in his Roman bathhouses. This sees him become favoured by Emperor Hadrian (Ichimura) but clash with emperor-in-waiting Antoninus (Kazuki Kitamura). Lucius soon finds himself caught up in political intrigue in between his time travel adventures but it is not all bad as he has met a beautiful aspiring manga artist named Mami (Ueto) who loves to sketch him.

END_OF_DOCUMENT_TOKEN_TO_BE_REPLACED

I recently took part in a readalong for Scott Lynch’s The Lies of Locke Lamora and enjoyed it so much I wanted to read the sequel Red Seas Under Red Skies which has a great title and pirates. To get more info on the readalong, head on over to Little Red Reviewer’s blog – she’s the lynchmob leader! This week’s questions come from My Awful Reviews and here they are.

(For an added sense of piratical action listen to this music whilst reading!)

1. The Sinspire. It looks like our heroes (can they really be called that?) find themselves in search of a way into an unbeatable vault. Do you think they have what it takes to make it happen?

Of course.  The thing that drives these guys is big heists. It’s like an addiction, their religion, so they’ll be dedicated to carrying out this audacious robbery. As we’ve seen in The Lies of Locke Lamora, even when the odds start to count against them they are confident and skilful enough to up their game. From what I’ve read so far it looks like the criminal underworld of Tal Varrar isn’t as organised or competitive as Camorr so Locke and Jean have a bit more freedom. Until some outside forces intervene.

2.  Anyone want to guess how they’re going to make it happen?

They are great at planning their jobs so they’ll have nearly all of the angles worked out and a detailed knowledge of the major players. If they don’t have the lock-picking skills then they’ll charm a solution out of someone – maybe even Requin himself. Locke is a master conman and it wouldn’t be impossible for him to do that. They are running a long con similar to the one in the first book so it will be interesting to see the variations.