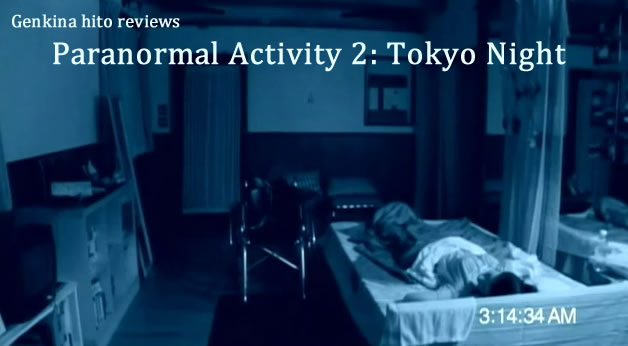 Haruka Yamano (Aoyama) is in Tokyo after a trip to San Diego, America ends with a car crash that leaves Haruka with two broken legs. Her younger brother Koichi (Nakamura) is wandering around with a video camera instead of studying for university entrance exams. While their father is away on a business trip Koichi has to take care of Haruka who will be in a wheelchair for another six months. Soon strange things happen around the house like Haruka’s wheelchair being moved from the side of the bed into another room and salt placed on the floor to expel evil spirits is scattered on the floor. Koichi records these events but things start getting weirder with noises at night, psychic friends scared away and the spirit is getting increasingly threatening.

I have a confession to make. I have never watched Paranormal Activity. I have watched a lot of horror films so when the franchise emerged I listened to critics who dismissed it as boring and figured that there was little interesting to see. I went into this with a vague idea of what might happen – a low-budget mockumentary captures people under siege from an evil spirit at night on film. Having enjoyed another supernatural mockumentary, Norio Tsuruta’s Noroi, I was open to seeing what Japan might come up with. 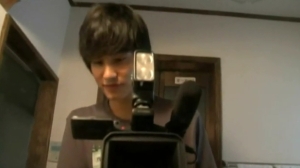 The film plays on the inherently creepy notion of being watched by an unseen presence and unaware of events transpiring around us when we are asleep and most vulnerable. Koichi’s fooling around with video cameras results in him secretly filming Haruka’s room at night which is pretty creepy considering they are brother and sister. Actually… secretly filming a person would be creepy in any context. It is this fooling around that captures the ghost’s antics.

We witness weird noises at night, doors opening and closing, wheelchairs moving, and lights flashing on and off. Nagae delivers us a realistic setting and records this with a mixture of wall-mounted night vision cameras and handheld ones.  It is well delivered but did little to send chills down my spine because despite being believable I was uninterested.

I understood that the ghost was transforming the house into its playground but I was unimpressed by events and when night time video footage played with very little happening I kept hoping to see something exciting like the black shape of some ghost peer in, arm extended and grasping at Haruka like in Insidious. Before long I knew I was not buying it when I questioned the entire mockumentary premise: why would Koichi would grab his camera before dashing to save his sister?

Then came the final ten minutes. I have not seen the original Paranormal Activity but Nagae delivers a barn-storming ending which involved more physical action than had been seen previously and also referenced films J-horror films like Ju-On: The Grudge. If only it could have been as exciting as this from halfway I would have liked the film more.

Anchoring the film are two strong performances. Aoi Nakamura plays Koichi as a good-natured and loyal younger brother (despite the creepy voyeuristic aspect). All he has

to do is look occasionally sheepish, handle cameras and scramble around. Noriko Aoyama makes the bigger impact because she has to scream a lot and does so with great gusto. By the end her nerves are shredded and I bought it.

Overall, I would have dismissed this film as dull nonsense if it was not for the last ten minutes and the cast manage which hold it together. There were some surprises that caught a horror vet like me off guard but I doubt I’ll watch another Paranormal Activity film again. Still… I cannot help but think there’s a film to be made about Koichi’s voyeurism…