With the 4th Terracotta Far East Film Festival kicking off next week now is the time to take a gander at the full line-up. This festival is London’s premier celebration of film from the Far East and shows a selection of the latest and most interesting titles getting on the big screen as well as bringing over the big names from the cast and crew of the films for Q&As and master-classes and parties. This year there are a selection of great titles from Taiwan, Burma, China, South Korea and Japan. On top of live action films there is even anime.

The Terracotta Far East Film Festival is also an event to socialise and a platform for Asian culture at all levels; for this purpose the organisers have organised a new FOOD PASS, giving access to a number of restaurants in Chinatown. There will be other related events such as photo exhibitions and competitions announced on social network sites.

Joey Leung, festival director says: “New look, same ethos. We worked with our creative agency, What is Bobo, to roll-out the re-brand of the festival with their ‘pixels’ concept. This lends maturity and longevity to our festival positioning, fitting now that we have passed the infancy of our festival and into our fourth edition.”

Here is the full line-up of films! 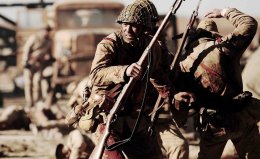 My Way is the latest film from Kang Je-Kyu who directed the awesome action picture ‘Shiri’, and tells the story of two marathon runners, one Korean and one Japanese during Japan’s colonisation of Korea who are drafted into the Japanese army, and develop a close friendship through battles in Russia and Germany. It stars familiar actor Jo Odagiri (Bright Future, Adrift in Tokyo) and Jang Dong-gun who seems to have survived The Warrior’s Way.