Indie director Gen Takahashi might be familiar to some as the director of the police/crime thriller Confessions of a Dog which was recently released by Third Window Films. Well he followed that up with the horror story Goth – Love of Death another film about outsiders and an exploration of existentialism, love and death.

A hot summer is made interesting when a dead body is left in an artistic pose on steps of a public park in a quiet neighbourhood. Gloomy school-girl Yuko (Rin Takanashi) wanders by and is attracted to the sight of the corpse. She notices a popular classmate named Itsuki (Kanata Hongo) also absorbed by the sight. The murder is soon linked to one that happened two months previously and becomes a media sensation. Yuko and Itsuki soon spark up a relationship and visit the locations of crime scenes together. When they find the killer’s notebook they realise he’s in their social circle.

The film is based on the Honkaku Mystery Prize winning novel named Goth which was later serialised as a manga by Kendi Oiwa. The film references these from the start with a montage of strange images.

Although the film spends a lot of time covering murder and death this plot thread is less fascinating than the developing relationship between Yuko and Itsuki. Just so you know there is little blood and gore just a lot of artfully posed corpses and an ever so slight mystery. The real meat, for me at least, was the growing connection between the two central protagonists and their character growth.

The film conveys the dislocation that the adolescent characters feel. The way the hot summer is captured by the washed out colours and the bouts of slow motion makes life look enervated. The way the camera observes the central duo as they observe others reflects the blooming awareness of their existence in the world.

Yuko and Itsuki may both recognise the absurdity of life but it is only Yuko who is authentic.

Itsuki uses his social ties to avoid personal authenticity. Itsuki has a mother and sister and

many friends and to them he shows a pleasant face. The camera will linger on him during tracking shots when he walks down long corridors where he greets others with a bland smile and jokes around but when he’s alone the smile will disappear. His reality and interests are not the same as others because he has far more macabre interests – notably death and killing. 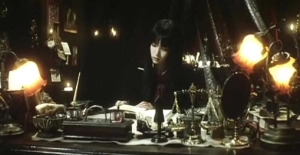 Yuko is a loner. She lives a solitary life in a cramped apartment with a library designed and furnished by set designers from Hammer Horror. It is a room stuffed full of gothic fixtures and furniture and bookshelves packed with tomes – not books but tomes. When Itsuki asks for her cell-phone number she replies “There’s no one to call”. It might sound like she is ostracised at school but her fellow students find her cute but gloomy, her essence pushing others who don’t share her interests away.

Yuko recognises a kindred spirit in Itsuki even if he covers it up. Their first connection is sweet in a dark way. When Itsuki is in the school library Yuko catches him reading books full of photographs of dead people. Later she hands him a book – All I Saw Were Dead Bodies written by Megumi. He in turn hands her The Works of H.P. Lovecraft which is the sort of pulpy stories for a person who questions reality and their place in it.

The two then fall into conversations analysing the killings taking place around them, the murderer’s aesthetic sensibility and their shared love of death. Through their growing relationship we get insights into their backgrounds and the experiences that have shaped them and the way they approach reality.

Although Itsuki’s obsession over violent and disturbing material might be worrying – alright, it felt downright wrong, it is an expression of himself. His comments over the killer’s work claiming that “it’s art” seem unreasonable but it is also key to him helping Yuko grow as a person and in identifying the killer. Are his beliefs reasonable? You will have to answer that for yourself. Watching the two transcend existence and grow as individuals was interesting and beautiful.

I really liked the acting and the way the direction captured these outsiders. It was low-key and creepy but very contained. The distance they feel and display felt real, the sort of thing that you would catch from a person in an unguarded moment or out of the corner of your eye. The way they perceive life is conveyed in a visually interesting manner and the soundtrack blossoms as the film progresses. It initially starts off as a charming electronic score before growing luscious strings as characters explore the sunny exteriors and verdant greenery. Like every other element hidden depths are revealed. If you are looking for a tight mystery thriller with blood and gore you would be better off looking elsewhere. For a more contemplative film Goth – Love of Death is fascinating. 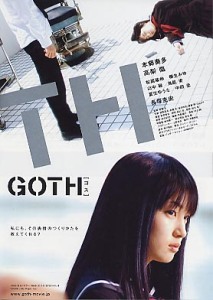