The One Missed Call franchise follows the law of diminishing returns: with each title the directors are less prestigious, the scares are less effective but the story stands in defiance of that trend as it becomes increasingly convoluted and silly. It all ends with this entry.

Asuka is mercilessly bullied by her classmates and when they journey to Korea on a high school class trip she plots her revenge by sending messages that contain menacing pictures and sounds depicting painful death to each classmate with the note “Death Exemption by Forwarding the Message”.  The first to get the message is Azusa, one of Asuka’s most vicious bullies, but she is sceptical. The next day, while wandering around Jagalchi market in Korea Azusa is assaulted by a supernatural force. After her attack the other students start to receive messages and hurry to forward them to others and avert their own deaths! 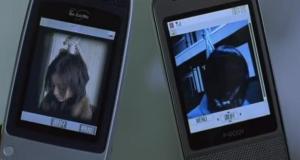 From the off we’re introduced to a class full of bullying jerks as they make Asuka’s life hell and then the rest of the film gives us delightful prospect of seeing them all get bumped off. The opening scenes are pretty disturbing as characters like Hideki, Hiroyuki, and Azusa are physically violent to Asuka and for the first time when watching a J-horror I felt that the vengeful ghost was justified in her attacking random people even vaguely connected to her suffering.