Third Window Films have announced that they are going to release Quirky Guys and Gals on the 3rd of October 2011. This is an anthology film from some interesting directors including Yosuke Fujita (Fine, Totally Fine) and Gen Sekiguchi who was the genius behind Survive Style 5+ a particular favourite of mine.

Quirky Guys and Gals (Sabi Otoko, Sabi Onna) ties together four stories of people searching for a spark in their lives. Yosuke Fujita (Fine, Totally Fine) leads off with “Cheer Girls,” an entertaining tale of a woman (Nanami Sakuraba) whose passion is to lead cheers—though not for sports teams. Rather, she finds common people and creates anthems to encourage them in everyday life. Tomoko Matsunashi’s “Boy? Meets Girl,” is a Tootsie remake in a high-school setting. Mipo O’s “Claim Night” sees the 30-something Mayuko (Tomochika) return home to find the electricity in her apartment turned off, yet when she finally gets a repairman to come over, their over-the-top confrontation gives rise to a wildly comedic situation. Lastly, Gen Sekiguchi (Survive Style 5+) offers up “The House Full of ‘Abandoned’ Businessmen” a quaint tale of a housewife who collects out-of-work salarymen to try and give them a fresh start.

Special messages from all four directors

Exclusive interviews with all four directors 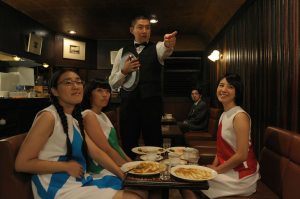 I’m looking forward to this release because it has a cast who have been in some of my favourite films of all time (Tokyo Sonata being one) and some of the more interesting directors in Japan to (so that’s what Sekiguchi-san has been doing…). As is usually the case with Third Window Films the bonus features are awesome and the DVD case looks top notch. The DVD is released on the 3rd of October. 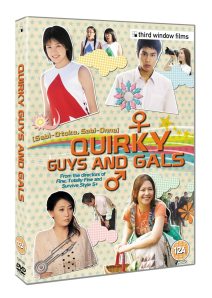