I love Kiyoshi Kurosawa’s existential horror films like Cure and Pulse so seeing him depart into the mainstream with a family drama was bittersweet but ultimately rewarding because it resulted in a masterpiece that finally revealed the genius his fans have long-recognised.

When Ryuhei Sasaki (Teruyuki Kagawa) is laid-off from his admin job his life as a salary-man is over and his family life is put at risk. The shame of unemployment means that he keeps his situation a secret from everybody including his wife (Kyoko Koizumi) and two sons, Kenji (Kai Inowaki) who wants to learn to play the piano and Takashi (Yu Koyanagi) who he barely speaks to. This means that each morning he dons his suit, picks up his suitcase and heads off to look for work and eat free soup with the homeless and other unemployed salary-men. Soon the lies and suspicion begin to take its toll.

Synopsis wise it sounds like the perfect tale for the age of global recession. Ryuhei is the victim of corporate outsourcing of jobs and this fragments his identity on different levels. The film charts his increasingly desperate attempts to maintain his image of breadwinner and the authority over his family that comes with it.

It is a frighteningly normal and recognisable world where humdrum life is shattered, exposing the underlying isolation and breakdown in communication, regular Kurosawan themes. Here Kurosawa uses his knack at creating/exposing the eerie and unsettling atmosphere just beneath our urban reality in the shadow world of the unemployed, the grim struggle to find work and the way humiliation destroys identity.

In a few deft scenes Kurosawa shows the importance of work to an individual and just how out of place Ryuhei is. In an overhead shot of a crossroads, a rush of office-workers surge past on their morning commute, a recently unemployed Ryuhei staggers along uncertainly. As we follow Ryuhei’s at the Hello Work agency a tracking shot climbs multiple flights of stairs full of various people also job-hunting before settling on Ryuhei looking embarrassed as hell. Soon he will have to accept work he feels is far beneath him, a reality brushed aside in Hollywood films but shown in agonising detail here.

Kurosawa’s constant return to the house, the family dinner where the audience is aware of the husband’s deception, witnesses the reality, the lack of communication between people. Simple looks and gestures contain familiarity and restrained feelings, one example being when Ryuhei and Takashi begin to argue the wife slumps down and holds her head in exasperation believably all too familiar.

This is modern Japan but Kurosawa can’t resist nods to his past work in a few lines of dialogue, recognisable vehicles, buildings and streets and actors but there’s a real change in the air. Warmer colours and the ability of the younger generation to fight for a future, making adults accept responsibility. In this case it is Kenji who wants to play the piano which leads to some heartbreaking scenes when he comes up against his father’s harsh attitude, hypocrisy and bitterness.

The film might be too miserable but Kurosawa’s light yet rigorous touch makes it easily watchable and relatable, the camera patiently showing information unfolding in scenes and just when you wonder if proceedings might become melodramatic he lightens mood with a spectacular sequence where the narrative jumps from the husband and focuses solely on the wife who encounters a burglar which is both hilarious and heart-breaking.

So how do you end a film where every certainty and social order has been turned upside down? With a realisation: I want to start again! It ends on a brilliant, emotional and thoughtful scene that yells out hope not just for the family but for everybody if they are willing to start again. A brilliant film, one of the best modern films created and one I can recommend without a doubt. 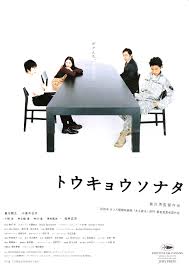