Hello once again dear audience. The final part of my anime heroines’ thread takes in the most modern of anime and the most modern of anime girls I watched in the years 2007-11 where a wealth of anime opened up online. Undoubtedly animation has become slicker and the stories are just as, if not even more entertaining than ever before but have the female characters improved?

I haven’t and won’t watch every anime out there, there’s far too much but I have watched a lot. Show’s like Monster and Le Chevalier D’Eon feature a cast of characters rich in depth and style, but most of them tend to be male. When I think back to 2010 with anime like Sora no Woto, Occult Academy and Durarara!!, the female characters ultimately turned out to be rather flat, adhering to one type or another, tsundere, moe etc. So who are the anime heroines that have impressed me?

The anime I watched that got me back into the medium after a long break. When I watched the second episode of Black Lagoon online I fell in love immediately due to its ballsy combination of extreme action, over the top set pieces and a distinctive cast of characters. The lead character may be a Japanese salary-man/fish out of water named Rokuro but chinese-American gunslinger Revy muscles him out of the spotlight with her sheer bravado and ruthlessness.

Based on Rei Hiroe’s manga, Revy’s exploits are brilliantly animated by Madhouse and given a glorious English language dub by Canadian VA Maryke Hendrikse as the foul-mouthed lead. Revy may be the only woman in the Black Lagoon company but not in the world they inhabit. The world is populated by strong and deadly women, my other personal favourite being Sawyer the Cleaner who uses a chainsaw.

Traumatised by her past, she offers a lot more sadness and vulnerability than expected allowing more private and philosophical moments that off-set the wild times and make Revy far more empathetic. Which is nice but her skills with weapons make her a deadly package and seeing her ruthlessly blow away the opposition with a manic grin is a joy to behold.

This anime makes me so happy. It’s in my top four. Kino’s Journey is an anime that challenges your assumptions thematically story-wise and character-wise. I don’t think I would be alone in initially considering Kino a boy. We make the lazy assumption that most protagonists tend to be men, especially gun-slinging protagonists. The character is young so the female Japanese voice actress Ai Maeda was reasonable because women are employed to voice young boys. Then came the fourth episode which revealed that Kino was a girl, not that that should have been important because the rest of her back-story both equally is heart breaking and life-affirming.

Kino’s Journey is based on a series of light novels written by Keiichi Sigsawa and illustrated by Kouhaku Kuroboshi of the same name about a traveller named Kino who journeys across a mittel European-style continent that has a patchwork of kingdoms and civilisations that are different from one another. Some cities are medieval while others are futuristic and others mix the two. Each different civilisation acts as an allegorical story teaching Kino and the audience something, all totally different only connected through Kino, a mysterious little girl who is as cool as ice, detached, philosophical. She is learning and putting into practice how to be a traveller as she journeys through these places.

Kino is a dangerous character when she needs to be carrying a small arsenal of weapons and having physical skills that defy her physical appearance. 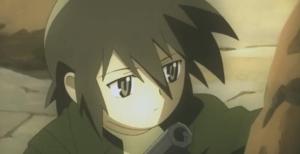 But she’s much more than a young girl with guns. She is a likeable presence, well mannered, polite but distant and somewhat capricious, she exemplifies an individuality and freedom I admire. It is when she finds somebody who mirrors herself, has the desire to travel and be free, that the characters rise above anime and achieve a degree of humanity and Kino really does shine more than most anime heroes’ and heroines’.

Based on Masakazu Ishiguro’s manga of the same name (which translates as And Yet the Town Turns), this story focuses on a school girl named Hotori Arashiyama who works in a maid café with her friends. We witness their lives at home, in school and at work wearing a traditional English maid outfit. Now it could have ended up unbelievably dull and cutesy slice of life anime but it was one of the funniest shows I had seen in a LONG time and earned enough of my attention and warranted a post last year. The show has excellent animation and a sharp script but the lead character was the main draw.

Hotori Arashiyama is a bumbling but cheerful, good-natured school-girl with a crush on her maths teacher who also wants to become a genius high school detective. Less Detective Conan, her brain and imagination is subject to the sort of wild free association and blue sky thinking that leads her down imaginative, surreal and hilarious paths much to the frustration and even pain of her maths teacher who is insensible to her crush on him. That said she has a winning personality and is brilliantly animated and voiced that I find her much more likeable than many other girls in anime.

That’s it for now. Here are links to past posts in the series.

Since I watch a lot of anime I’ll have plenty of time to revisit this series and add to it.