The second part of my history with anime girls brings me right into the mid-90’s when anime was on television pretty regularly and the strength of Japanese-made consoles made the anime aesthetic quite well known. Speaking of anime heroines, get yourselves down to the cinema and see Arrietty! It’s magnificent!

Much too young (still single digits as far as age goes) to appreciate how difficult importing Japanese games were I still had magazines packed full of illustrations to gaze at. This is where the anime aesthetic became more easily recognisable for me (compared to the European character designs seen in the previous post).

I would spend many hours tracing the elaborately illustrated images for characters like Ryu from Street Fighter but it was the girls who caught my attention simply because they were much more distinctive.

I have never played the game but I have watched it being played on my technology mad uncle’s Sega Mega CD (he has owned every major console released in the UK). Inspired by Dragon’s Lair, the game allowed the player to select actions within a time period and a video would play out. I remember watching with fascination as Time Gal Reika Kirishima battled with cave men and dinosaurs. 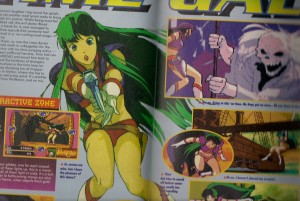 Taking a more active role in the action she was the first female videogame protagonist I had ever seen and she was totally cool and cute – especially when in chibi form. She was handy blasting and punching monsters and sliding down hills in cool videos and wore  a skimpy outfit which struck me as silly but what the hey. I loved the animation and character design so much they stuck in my memory.

According to Wikipedia Time Gal was animated by Toei Animation back in 1985 (!!!) and the main protagonist was voiced by Yuriko Yamamoto (Fist of the North Star) so that’s some pedigree. More interestingly the character was based on Lum from Urusei Yatsura.

Anime on the Sci-Fi Channel – Part I

Now we come to the mid-90’s when anime was shown on the Sci-Fi channel and the amount of interesting female characters rocketed. According to the Wikipedia list of shows screened there seems there are more than a few titles missing which means that the UK arm of the Sci-Fi channel must have cut various deals with Manga Entertainment to screen titles. Anyway, here are the heroines…

There are a lot of strong females in this show but three women stand out: Lisa Hayes, Lynn Minmay and Claudia Grant. 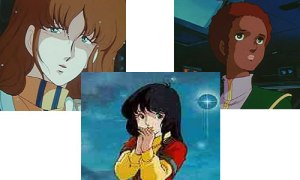 As a boy this used to come on early in the morning and I used to rush downstairs to watch it. I was drawn to the military themes of the show and the Valkyrie fighters but there was a lot of depth given to the characters – far more than on western shows. These three women were actually well written.

Lisa Hayes – grown-up, strict and disciplined. So unlike her rival for main protagonist Rick Hunter’s Affection, Lynn Minmay. She could be rather tough yet caring. She is struck by personal tragedy early in the show but soldiers on and became my first military girl – intelligent, efficient and dedicated to her duty, putting her personal feelings to the side and risking her life just as much as the men. Actually she’s senior to most men in the anime so perhaps my respect for women in authority came from her as much as it came from mother, teachers, etc.

Lynn Minmay irritated me. She still did when I re-watched Robotech two years ago – the idea that some immature pop idol might be able to change the course of a war through some corny songs… but she actually proves to be a tough customer evolving along an interesting character arc as the series played out, dealing with tough themes like having an abusive boyfriend. I still can’t stand her songs.

Claudia was a stand out because amidst the melodrama of Rick Hunter’s love life was a quiet relationship between Claudia and Roy Fokker –  a black woman and a white man. The first inter-racial relationship I had seen in a cartoon. Watching Robotech recently I was struck by how intelligently the relationship was handled as the show progressed including flash-backs to their early courtship.

All three provided surprising content for a show on so early in the morning when kids like myself would be watching, no wonder the three are memorable.

According to Wikipedia Moldiver was parody of robot shows and magical girls. From what I can remember, this was the first animation I watched where a character constantly ended up nude… 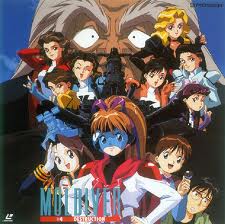 This anime won’t be so familiar to most so I’ll explain. Mirai Ozora is a model who likes to shop. Her older brother, Hiroshi is a genius inventor who creates a Mol-Unit, a device that provides super armour that makes the wearer nigh-on invulnerable. For 666 seconds. Then the suit disappears and the user is left naked. Hiroshi creates a super-hero named Captain Tokyo but Mirai gets her hands on the Mol-Unit and decides to give the costume a make-over.

Embarrassed by the change in gender Hiroshi gives the device to Mirai who uses the device to goof off but is forced to become a super-hero when villain Doctor Machinegal and his harem of sexy androids attack Tokyo.

Watching this now as a pretentious film buff I would dismiss it as fluff then I would reconsider my opinion and say it is fun.

I can’t remember seeing a nude animated character before Mirai but the nudity was always handled in a comic manner. I was too young to attribute anything other than comedy to nudity anyway.

What stuck was the fact that as a character she was loveable because she was good natured, scared, determined, forgetful, pleasant, enthusiastic and tough. Human effectively.

She was also totally dedicated to her boyfriend, risking career, life and limb to see him achieve his goals despite the dangers she faced and always ended up without her clothes. Looking at it from an older, far more politicised position, I see this as pure male fantasy. Back then I was too young to see anything but a good natured animation. 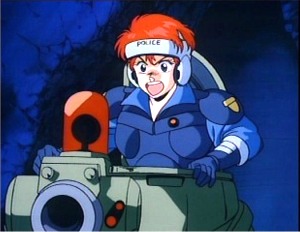 My favourite red-head. A new transfer from the motorcycle division into the tank division she finds herself like a fish out of water having to fit in with a hyper-masculine tank division with a mantra running along the lines of shoot first ask questions later. These guys are hilariously OTT and almost always useless. Leona on the other hand despite being nearly overwhelmed by danger copes and overcomes situations with a scream and much gutsiness that was charmingly conveyed thanks to British voice actress Toni Barry’s game portrayal. 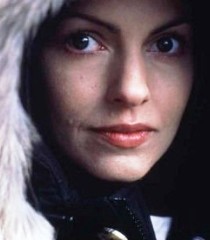 This anime was a favourite of mine because it was hugely enjoyable and amidst the sex and violence of mid-90’s anime, having something as cheerful and tongue in cheek as Dominion Tank Police was a relief. Too young to get half of the jokes – eye-brows were raised when I re-watched this scene…

I felt attached to Leona because she was a brilliant counter-balance to all of the dumb machismo and bravado that Lieutenant Britain and the rest of the Newport Tank Police Crew. 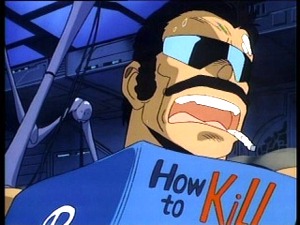 In the sequel she becomes an ultra hard-ass and much more cartoonish but by that time she had already made an impression on me as a humane and amusing character and her love for her tank Bonaparte was cute. 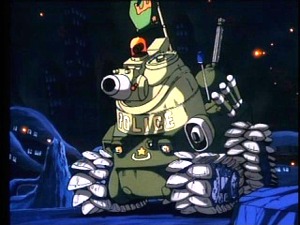 This post has gone on for long enough, but I’ll leave you with the awesome UK-made intro to Dominion Tank Police. Stay tuned for the next part where the ladies get better.