The start of the film is a test for an audience: a black Ferrari going around and around a race track. It is being driven by the main character, Johnny Marco (Stephen Dorff). The scene goes on and on, the camera stationary even when the car leaves the frame. After a few minutes the car stops, Johnny gets out and looks lost.

Sofia Coppola has obviously demonstrated a metaphor about Johnny’s life and if you are bored then you have a short attention span or lack patience.

This is so similar to Sofia Coppola’s best film Lost in Translation (a film I watched twice in a cinema). Jaded actor undergoes existential crisis until young girl enters life.

A lot of criticism suggests that Somewhere is boring and an actor’s angst is not interesting or worthy screen material. These criticisms have missed a film that actually dazzles with humanity. For me, a film must allow me to immerse myself in a world and open up with something deep – Somewhere does this.

Throughout the film there is a mixture of tracking shots following Johnny himself and close ups where the camera can study an actor gaze meaningfully. This is a film that expects an audience to join the dots. Thankfully, it was not dull or self-indulgent but a necessary build up to give a sense that Johnny is in a gilded cage.

The film does nothing new by exposing and undercutting the falseness of Hollywood but it adds to a naturalistic build up for the characters. There is a press junket where Johnny stands on a block for extra height and he is asked ridiculous questions (who is Johnny Marco?) and unable to answer them. He has private pole-dancers perform ridiculous routines and he can indulge in casual sex (indeed, women are presented as so much meat – but then, this is the entertainment industry). The fact that we follow a burnt out Johnny, his tiredness undercutting the sexuality he’s being offered, sets in motion a fascinating path for his character especially when he is rebuffed and left floundering. 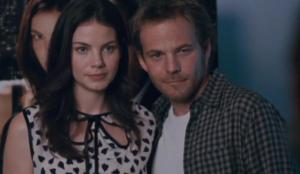 Unlike other actors, Johnny Marco has no training or acting ethos, he has become a star by chance. He finds himself able to indulge his desires but is also equally uncertain. We spend time watching him smoking, gazing, drinking, contemplating whilst girls in his entourage, living around him and just hanging off stair-wells wolfishly watching him.

He is lonely, wandering around parties by himself, hectored by hangers on and groupies, hated by strangers. He loses track of days and falls asleep at odd intervals. Clearly lost in stardom, standing on his balcony he sees a billboard which asks “Do You Know What?” Clearly he doesn’t until Cleo (Elle Fanning), probably the purest thing in his life, arrives and the film opens up even more.

The film comes alive with Elle Fanning and her real and naturalistic relationship with Stephen Dorff. It was genuinely moving as there was a sense of real chemistry thus the shared glances and secret smiles spoke a lot and when the emotional scenes came, they felt natural not mawkish or awkward.

The details for her life are cleverly placed. Cleo can cook and look after herself, which struck me as admirable then I realised that she is 11 years old which immediately made me uneasy. Thus I found their growth from friends to father and daughter really moving and a relief. 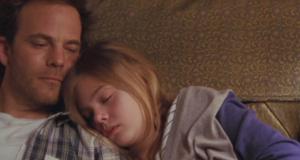 In other words Cleo gives Johnny a real direction after he finds himself rudderless for so long is a relief and with an ending which suggests escape which was incredibly satisfying because I was willing him to be a better man(!) for his daughter. Maybe I am being sentimental (in which case, please shoot me) but I really cared about these characters. Thus the film worked for me.